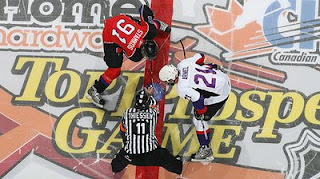 The Pipeline Show has learned that The 2009 CHL Top Prospects Game will be hosted by Generals - The OHL's Oshawa Generals.

In conversation with someone who would know, the as yet unannounced deal should be main official in the coming days. Lending credibility to the insider's tip is this story our of that neck of the woods in Ontario from earlier this month where CHL head honcho David Branch confirmed that Oshawa was a leading candidate.

Last year's game was held at Rexall Place in Edmonton and gave the local interest level in junior hockey a nice boost as the Alberta Capital is still apparently figuring out that there is a WHL franchise in town.

Now the game reverts back to a long-time junior hockey market one where big names like Bobby Orr, Eric Lindros, Jason Arnott and Nathan Horton all got their start. 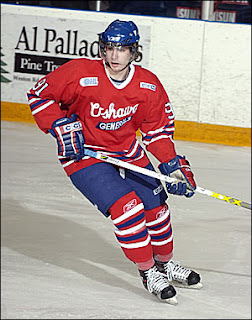 Current General and potential #1 overall pick John Tavares will headline the event. Whether or not he's still a member of the Generals when January roles around is a different matter. As Dean Millard broke on The Pipeline Show a couple of weeks ago, rumors are abound that Tavares has asked for a trade out of Oshawa and that both the Kitchener Rangers and the London Knights have expressed an interest.

Monday Tavares was one of four players to be named a 2009 Draft Prospect Performer of the Week, an award handed out by Sports Management Worldwide, ISS, The Pipeline Show and Hockey Now.

Each week on The Pipeline Show we will speak with one of the winners of the award, available only to those players eligible for the upcoming 2009 NHL Entry Draft. Tavares will make his first appearance on TPS this coming Tuesday night.

Week 1 winners: OHL - John Tavares (Oshawa), QMJHL - Guillaume Goulet (Baie-Comeau) and the WHL's Cody Eakin (Swift Current). The USHL will also have a weekly winner but the American junior league has not started their regular season.
Posted by Guy Flaming @ 11:18 AM

I certainly hope the Oilers' scouts take a pass on this game, because the team has more than enough good young players that will last for years and years!

ha ha...I guess we should work BBO in our weekly promo now, playing the roll of LT