The NHL camp season officially got underway today in Camrose with what were two pretty up-tempo sessions of pracitce with the Oiler rookies.

Ryan O'Marra - Much bigger than he was this time last year, weighing in on Friday at 222 pounds. Without sounding too interested in his physique, his arms and chest are much more developed than when he first came to town as an Oiler. I was razzing him after his session because Jordan Eberle had set him up with a pass that O'Marra received inside the crease and still managed to miss the net with. His reply: "Hey man, my job here is to make room for guys like Eberle not to score goals!" He was only half joking. That's exactly what the Oilers want from him and kudos to O'Marra for making that mental adjustment. Still... you're in the blue paint you might as well hit the net!

No question the guy who made the biggest impression on me on day one was Hans Benson (or Ben Hanson to some of us on press row). It's only day 1 but already he's ready and willing. After Taylor Chorney 'stepped up' on him during a drill, Benson gave Chorney a whack in the shins and started jawing with him. That drew the attention of Theo Peckham who was paired up with Chorney on the drill. Peckham and Benson continued their verbal exchange for about a minute after. I spoke with all 3 of them afterwards about the first attention grabbing moment of rookie camp:

"He's a guy that plays a physical game and I just made a read and stepped up a bit and he's the type of guy that likes his space out there and he didn't like that too much," said Chorney. "He's definitely a guy out there that you want on your team and I'm sure he's going to do some damage out there tomorrow night [against Calgary]."

"It's a lot easier to put those [fires] out than to start them up," said Peckham, "It's good to see that the intensity is there but thank God things didn't get out of control out there."

"It's all about respect. I just tried to make a statement that if you're going to step up on a guy like me it's going to come back on you that maybe you were barking up the wrong tree," said Benson, "It's a game of respect and if you're going to do that then... you might as well go." 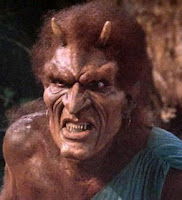 Two notes in regards to the Chorney/Peckham/Benson thing: While I was talking to Chorney, Benson walked by and gave him a friendly tap in the shins so clearly no hard feelings. Secondly... Benson is a monster! He's not tall but he has a chest like a barrell and he's covered in tattoos and he has a curly red semi-afro. Quite frankly he kinda scared me. Ever see Clash of the Titans when you were a kid? Think of Calibos.

In the second grouping, a much weaker group in my opinion, things were a little less intersting. It wasn't a great start for Alex Plante who seemed to be falling a lot in the first half of his on-ice testing. He looks like a guy with a lot on his mind and he does.

"Between the Oilers my agent and myself we felt that it would be better for me to come here first," Plante said when I asked him for an update on his situation with the Hitmen, "With the Hitmen, I'm not really looking at that right now, I'm more focused on the Oilers camp and in trying to set a good impression here."

Plante has no idea where he will be in three weeks if after the Oilers camp he still hasn;t be traded from the Hitmen. According to him he cannot go back to Jr. A if the Hitmen suspend him and he cannot play in the AHL. Tough scenario for him but he made a point of telling me "I'm not out to burn any bridges".

In my opinion the best player in group two was Tyler Spurgeon who told me afterwards that he felt like he really had a lot of pop to his game. "I felt surprisingly fresh out there," he said, "My shots were going where I wanted them, I thought I was moving the puck really well and there wasn;t too much rust to knock off thankfully."

I thought Milan Kytnar was pretty decent too and with his move to Saskatoon from Kelowna he's going to be taking on a much bigger role. "I will have a lot of ice time, I've already had a lot in the two exhibition games that I played so it's a good sign." I asked him whether he expect Colton Gillies back from Minnesota's camp and although he'd like to think so he said it didn't seem liekly. That will be a huge loss for the Blades.

Tomorrow night as Calgary comes to town you can expect the Oilers to dress the first group from Saturday's activities so you'll see the likes fo Chorney, Eberle, Trukhno, O'Marra, Dubnyk, Hrabal, Bisaillon and yes... Benson.

I asked Craig MacTavish today how many goalies he felt would be a good workable number for main camp and he suggested 6 or 7 which would mean all of the four at rookie camp will proceed on or perhaps one will get cut before next Friday.

Thought the Ewok line with Chwedoruk/Hunt/Lafrance looks like they will be a lot of fun to watch.