This year several teams seem content heading intot he season with unproven or largely unknown backup goaltenders. Here's a few, in no particular order, that you'll get to know this year.

Passed over in the NHL draft despite a decent (but not great) junior career with the Peterborough Petes, MacDonald came up through Detroit's minor league system. He spent 4 years playing in AHL Grand Rapids then was moved to the Boston Bruins organization during the 2006-07 season. Last season he jumped to the Islanders sytem and spent most of the year with their minor league affiliate, the Bridgeport Sound Tigers. 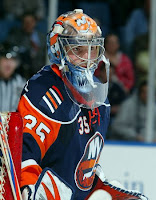 With Wade Dubielewicz moving on there is a vacancy on Long Island behind starter Rick DiPietro. The battle for the job falls to MacDonald and Yann Dannis but the Nova Scotia native appears to have an edge. With DiPietro's health a concern, MacDonald could see more playing time than expected.

L.A. has been the place goalies went to die but that may be slowly starting to change. Jason Labarbera has claimed the starter's job after a fairly decent year with the Kings. Several goalies played last season but it appears that unless the team goes out and acquires a veteran like Nikolai Khabibhulin or Dwayne Roloson, the back up job will fall to Swede Erik Ersberg. According to the Kings website... that might be the sensible plan to take: 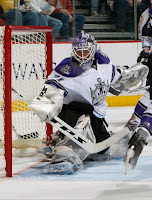 In only 14 appearances last season, Ersberg had a modest 6-5 record, but his .927 save percentage was anything but. His best appearance came in a 40-save shutout of the Ottawa Senators on March 6, 2008, followed closely by a 39-save 2-1 shootout loss to the Anaheim Ducks on March 26.

With Mike Smith gone to Tampa Bay the Dallas Stars will have a new second string keeper behind former Michigan Wolverine Marty Turco. That appears as though it will be Tobias Stephan, Dallas' 2nd round pick way back in 2002.

Stephan has been playing in the AHL for Iowa the last couple of years after leaving his native Switzerland back in 2006. His numbers are fairly ordinary, barely a .500 goalie with pretty pedestrian stats, but the Stars seem willing to give him the job. It's not like he's going to have to play much unless Turco happens to get hurt...

He has been a standout in the minors for the past few years but Pekka Rinne's AHL career looks to finally be at an end. He was a 8th round selection by the Pres in 2004 and has spent the last 3 seasons in Milwaukee going all the way to the Calder Cup Finals in 2006. He was also a 2008 AHL All-Star as well. 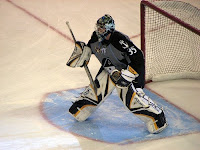 Rinne is big at 6'4 and nearly 200 lbs, and although Dan Ellis should be the starter, should he falter under the pressure you can expect Nashville to not pause long before getting Rinne in. They like him and have confidence in his ability to be another in a long line of Finnish born NHL goalies.

He's got the 1-way contract on his side so most people expect the former Colorado College netminder to win the reliever job behind Miikka Kiprusoff in Cowtown. Playing second fiddle there will be a lot like the same workload in Vancouver... as in pretty light but the 25-year-old London, ON product should be ready for the next step. He'll be pushed by Matt Keetley but the competition should bring out the best in McElhinney as well. He only played five NHL games last year but has been one of the best 'tenders in the AHL over the last 3 seasons. 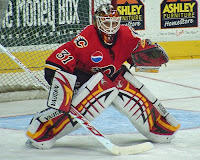 Now, while none of these guys are expected to be starters this season but circumstance and fate could lift them into bigger roles than most expect. Last year Chris MAson was supposed to be the guy in Nashville and he lost his gig to Ellis... it's not unthinkable to believe the same could happen for one of these five in 2008-09.
Posted by Guy Flaming @ 2:41 PM

Ersberg was the legit starter for HV71 in the 06-07 Swedish EliteSeries and won the Swedish equivalent to the Vezina trophy (goalie of the year). HV consistently has been near the league title the last 4-5 year much credit to their goaltendning. Erik Ersberg and Detroit drafted Stefan Liv were THE duo of the Elite Series in 05-06.

Ersberg got the starter role when Liv went to N.America in 06-07. Although Liv played only a single season with Detroit's farm teams before returning to HV, it would seem a better NHL fate awaits Ersberg in LA.

With goaltending, getting the role seems to have a bit to do with being in the right place at the right time. Since losing Garon, the Kings were thin in goalie depth and resultedly Ersberg waltzed into the back-up role. Whether he can handle the top job remains to be seen, but I concur that his dramatic development from undrafted to Swedish Goaltender of the year to the NHL shows a very positive curve.

ODDITY: His home town is 50km NE of Tommy Salo's Surahammar (Ersberg was 11 yrs old when Tommy left for the NHL, so this likely nothing more than an oddity)

thanks for the info Jamie... good stuff.