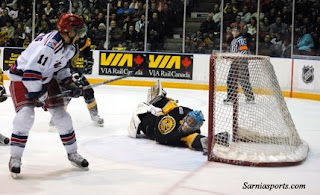 OK so maybe he's got the name of a magician but Andrew Perugini's greatest trick has come on the ice with his solid play which has in turn earned him a pro contract with the Edmonton Oilers.

Maybe. Depends on who you ask I guess.

News today from Sarnia where the head coach of the local OHL club has been quoted talkng about how his goaltender has signed with the Oilers. You can read that article here. Coach Dave MacQueen is quoted saying all the right things; about how the Sting are happy for Perugini and how they had a hand in helping him realize his lifelong dream of playing pro hockey.

There's no reason for coach MacQueen to say anything different because he's right. Although Perugini spent the vast majority of his career with the Barrie Colts, he ended it in Sarnia playing behind Steve Stamkos and company. And, like in the picture above, has apparently done just enough to make a great save... but instead of a puck, this time he's snagged a contract.

Or has he? Noticing a lack of announcement from the Oilers I placed a call and was told that while there has been discussion about doing so, no formal announcement can be made yet about signing Perugini. (pronounced with a soft 'g' like a the genie in a bottle).

So what's going on here? Sarnia's coach is talking openly aboutlosing his starter, someone he would have welcomed back as an overage tender this year, but the Oilers can't confirm that they've signed him yet? 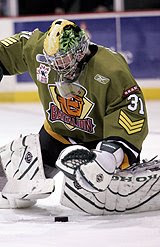 Seems odd to me but hardly unprecedented is it? Remember Cody Wild and Bryan Pitton? We told you about those signings several days before the Oilers made it official, in fact I think we even had Wild on the show talking about joining the Falcons before the NHL club confirmed it.

Suffice to say, I'm more than confident that it's a done deal but the fact that the official word from the team is silence... isn't that big of a surprise to me.

Speaking with Dean Millard earlier today we were debating on where Perugini fits into the big picture. Where will he play assuming he doesn't go back to Sarnia as an overage goalie?

My first thought was that they'd rotate he and Bryan Pitton between the starting job in Stockton and the back up spot in Springfield behind Devan Dubnyk. That way one would always be playing while the other was at least practicing at the AHL level with AHL shooters. You could switch them out on a regular basis so that they could both get ample playing time, but the negative to that is all about the travel. It's not like Stockton and Springfield are close to each other, it is a cross continent trip.

Dean came up with the idea of keeping Glenn Fisher in Springfield as Dubnyk's saftey net and having both Perugini and Pitton in Stockton playing exactly half the games each. The downside being that should Dubnyk struggle, you're relieving him with a goalie most have come to think of as the lowest guy on the depth chart (Fisher). 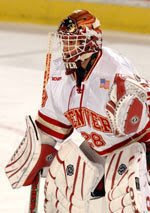 It will be interesting to see how the team handles it, especially considering some think they will test the waiver wire with Jeff Deslauriers (not my opinion but one other media guys have mentioned).

Can the organization just sever ties with Fisher now that he's on a 100% minor league contract? I don't know for certain but that would be another way to clear the log-jam.