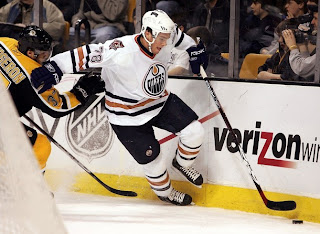 Not quite a year ago Guy and I had a conversation about what the Oilers should do with Marc Pouliot. Training camp had come and gone, and it sure looked like Pouliot had let a spot on the Oilers slip through his hands. Pouliot looked to be pencilled in on the Oilers 4th line before camp, but came to Edmonton ill prepared and ended up in Springfield. My co-host and I wondered if he was ever going to get "it" and figure out how to stay with the big club.

We started throwing out names and the kind of value the Oilers could get for Pouliot. One of us (Guy will tell you it was him because he's so smart) brought up Eric Fehr of the Washington Capitals system.

Now I ask you, would you deal Marc Pouliot for Eric Fehr??? 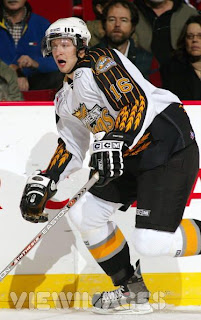 Their stories so far are somewhat similar. Both were drafted in 2003, Fehr (a former Brandon Wheat King by the way..I feel I should come clean on that) was the 18th overall selection, while Pouliot was 22nd. In case you forgot, Zach Parise went 17th to New Jersey, which was a pick obtained from the Oilers. Anyway Both players were stars in Junior hockey, Pouliot racking up 114 points in his final year with Rimouski, while Fehr notched 50 and 59 goals in his final two seasons wearing Wheat King silks.

The Pair have spent the majority of their first 3 years toiling in the AHL where Pouliot has put up 123 points in 153 games, while Fehr has accumulated 101 points in 121 games, having missed 52 games over the span with a compressed nerve in his back. 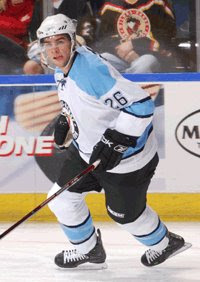 Both players have limited NHL experience, Pouliot with 78 games and 19 points to show for it, while Fehr has skated in the show just 48 times with 9 points. Last year their numbers were virtually identical. The Oilers coaxed 7 points out of Pouliot in 24 games, while Fehr's name appeared on the stats sheet with 6 points in 23 Capital contests.

Off the Ice, Fehr has 3 inches and about 15 pounds on the 6'1 195 pound Pouliot and in my opinion comes with the greater offensive upside. But Fehr doesn't use his 6'4 frame enough, and will need to if he wants to succeed in the NHL. Pouliot is more reliable defensively than Fehr and while not as big, is a much better skater.

Last year, I thought this would be an even trade for both teams, as sometimes all it takes for a player to bust out is a change of scenery. Apparently the Oilers and Caps didn't think like me as this didn't happen. In fact, Pouliot signed a 2 year one way deal this summer, while the Caps inked Fehr to a one year deal. 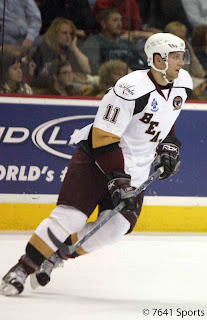 However maybe it's a good thing the two teams didn't listen to The Pipeline Show, as with NHL coach of the year Bruce Boudreau behind Washington's bench, Fehr might blossom. It was in Hershey with Boudreau as his coach - before his injuries - that Fehr played his best pro hockey. He notched 47 goals in his first 110 AHL games.

As for Pouliot, he looked like a pro down the stretch with the Oilers last year, playing a steady game for Craig MacTavish, surrounded by other younger players, which has to be less intimidating than looking around the bench and only seeing 5-10 year veterans beside you.

Pouliot should be able to snag a 4th line spot this year, and I think a healthy Fehr can play his way onto the Capitals third line, and maybe work his way up the depth chart.

A year ago I would have made this trade if I was both teams. Today I wouldn't...would you?
Posted by Dean Millard @ 3:12 PM

In cases like this where you're getting a player of the same age, position (basically), and who has nearly identical stats being in the same situation as a pro, you've gotta go with the imortal words of Tammy Wynette and stand by your man.

I agree for the most part Misfit, with this team I wonder where you fit Fehr in...however in most cases I would take the more offensive guy...but in this case, Pouliot fits the Oilers better right now than Fehr does.