Fun On The Farm

After watching training camp and 2 pre season games, I have come to one conclusion; Life in Springfield will be extremely entertaining this year.

While the Oilers should be able to compete for the Northwest Division in the big show, the Falcons could fly high in the AHL as well. Springfield basically bought property at the .500mark last year and finished with an even steven record of 35-35-5-5, they were 8 points out of a playoff spot. That shouldn't happen this season with the amount of tools at the disposal of new head coach Jeff Truitt.

Players like Colin McDonald (pictured), Slava Trukhno and Ryan O'Marra up front will be entering their second pro season and should be ready to play more of a roll on the team. Factor in Rob Schremp and/or Gilbert Brule should they be sent down to the farm and add in Bryan Lerg who's impressed at Oilers camp, and the Falcons will boast an impressive first 2 lines. Big Geoff Paukovich and versatile Davild Rohlfs may also factor in for the Falcons.

What Springfield didn't have last year, was a mobile defence. That won't be a problem this season. Taylor Chorney and Theo Peckham will be the top pairing, which will be blend of stay at home toughness from Peckham, and the smooth skating, heads up play of Chorney. Cody Wild, Josef Hrabl - when healthy - and Rob Bina will also be able to move the puck, meaning the Falcons won't have to employ the "chip it off the glass and out" breakout they used for most of last year. The increase of puck movers on the back end will add to the offence and should prevent Springfield from getting outshot by a large margin, something that happened way to often last year.


Lastly, this team will not be fun to play against. With old school body checkers Theo Peckham and Bryan Young as well as a tough AHL veteran in Jake Taylor on the back end, crossing the blueline into the Falcons zone will require some courage. And don't expect opposing players to take liberties with the birds top gunners. That's where body guards, Hans Benson, Guillaume Lefebrve, and Sean McMorrow will be cracking their knuckles in anticipation.

Lefebvre came to Oilers camp without a contract, and told me after Wednesday's game against Florida that he wasn't sure how many games he would get in so he knew that he had to make an impression. Mission accomplished - he fought twice and dished out some big checks. Anyone that's watched Hans Benson in camp thus far knows he's a decent skater and is willing to scrap anyone. The great thing about the pugilists is they are ready to start fights, and stick up for their teammates as has been proven so far in the pre season. 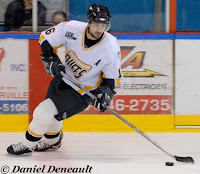 On a side note, I think the Oilers have to be leading the league in inviting players to camp who played in the infamous Ligue Nord Americaine de Hockey (LNAH). Or simply put the "Quebec fighting league." Both Lefebvre (pictured) and McMorrow played there last year and neither are shy about shedding their gear and throwing the skin hammers... a refreshing sight for skilled players in the Oilers system.

Put all the tools together, and it gives the head Carpenter, Jeff Truitt a good foundation to build upon, and Truitt should open things up a little on the farm and let his horses run. If he does, the Falcons and the Oilers might be playing well into the spring this year.
Posted by Dean Millard @ 12:31 AM

If the Springfield Falcons themselves were to play in the NHL NW, they would surely finish a close second to the Oilers!

Um... no. Come on Bryan, surely you jest. An AHL team would not finish 2nd in any NHL division even if they ALL had Robbie Schremp.

Ya good direction that the franchise is heading. Build from within and competition from the farm should only make the team better. I'm excited about Hrabal for some reason moreso because the Oilers have had success finding D.

Have you ever read your blog through google reader? You might want to change the yellow text.

Hey thanks Sean... but WTF is Google Reader?

I just type the blog into the URL thingy at the top and read the page.

I have no idea what you are referring to or why the yellow on the black backgroud would be hard to read.

But I'll try to not use yellow.

Google reader is a program that lets you subscribe to blog sites. It lets you know when a new article is posted and marked it as read once you read it. My guess is a lot of people use it. The yellow text isnt really a big deal, the fact that people are reading is more important ;)