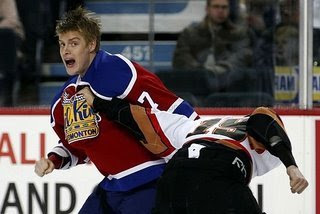 Everyone knew that someone had to go. The Edmonton Oil Kings began training camp with 5 returning 20-year-olds in the mix and only 3 could stay. When forward J.P. Szaszkiewicz left of his own volition to join the University of Alberta Golden Bears, half the dirty work was done. Tonight, GM Bob Green trimmed the rest of the fat when he sent Cameron Cepek to the Prince George Cougars for a 3rd round pick in next year's Bantam draft. (official release here)

Guy's Thoughts: Hey chalk one up for The Pipeline Show because this was the guy Dean and I thought the club would move all along and correctly predicted here, here and here.

I think the team can live better without Cepek than they could have without Brenden Dowd or Jeff Lee missing from the top line and Brandon Lockerby is their top offensive weapon from the blueline. I really thought it was a pretty easy choice.

The fact that a guy like Drew Nichol is willing to fight, Adrian Van de Mosselaer looks bigger and willing to drop'em and newcomer Jesse Pearson appears willing to fight anyone (except maybe Assistant Coach Rocky Thompson) to make the team... Cepek was expendable.

Great move for the Oil Kings, I honestly don't know what he was like in the room or off the ice, he could have been a terrific guy who the rest of the team thought highly of. However, I don't think Cepek will be missed on the ice.
Posted by Guy Flaming @ 9:16 PM