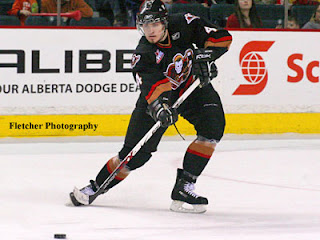 Found tonight under the 'Expect the Unexpected' mantra that Kevin Lowe is so fond of quoting is the fact that 2007 1st round pick Alex Plante has re-joined the Calgary Hitmen.

No release from the Oilers on it, he just turned up at the Pengrowth Saddledome tonight, started for the Hitmen on a defensive pairing with Paul Postma (ATL) and assited on the game's opening goal. Calgary beat the visiting Kootenay Ice by a 3-2 shootout score.

Dean and I both have calls in to the Oilers and are awaiting response. Once we get some details we'll gladly pass them along.

Interesting change of events though. Does this mean all is forgiven between player and organization? I'm doubtful. Perhaps it's a mutual decision that a trade would be achieved faster if Plante were on the ice playing in the WHL.

UPDATE: My request for an official comment from the Oilers today has been turned down, or at least delayed, as this is another off day for the organization. Of course it won't exactly be breaking news tomorrow but I'll see what I can find out anyway. I would expect to see something on the Oielrs website by then anyway.

Obviously media in Calgary was able to get on the story last night after the Hitmen game. The Calgary Herald and the Calgary Sun had these two offerings this morning.

Plante wasn't made available for interviews, but Lowry said the return was a case of turning the page.

"It's a case where he wants to play and we want him to play here," Lowry said. "It's something that's been in the works for a while. Yes, there was disappointment on both sides from last year, but time has been good and last year's over.

"As far as we're concerned and as far as he's concerned, last year's over and today's a new day, a new chapter, and we're looking forward."

and from Heather McIntyre:

"(Plante) played a great game," said Hitmen coach Dave Lowry. "I think it's clear that both parties have put their differences behind them."

General manager Kelly Kisio has been working the phones for a while to find a suitable fit for the defenceman, who was unavailable for comment, as well as a suitable return for the Hitmen.

Now, instead of asking where Plante will be traded, many are wondering whether he will be or not.

This season-ticket holder was as stunned as anyone when he finally reached his seat after the second whistle (5:06 of the first) and saw "PLANTE 4" skating in front of him. I wonder if there will be any comment, and if Plante will be at the meet 'n' greet with the STH next weekend.

It's just a hunch but I suspect nobody is going to want to comment much on it. Not the Hitmen, Plante or the Oilers.

I think there is still a lot of resentment under the new 'one for all' surface. I won;t be shocked if a trade happens sooner now that he's back playing and I suspect that's the whole reason who his return in the first place.

I hope it happens for everyone involved.