A few things have found their way into my brain cavity recently, I've noticed because with so much room in there I've heard these thoughts running around like my kid at the all-you-can-eat Oil Kings game last night after his second bucket of cotton candy.

Or like that massive run-on sentence... Mrs. Sinclair, my Grade 7 English teacher would be so disappointed.

Anway, I have to come right out and admit something first: Since the Camrose and UofA rookie camp, the only part of training camp that I've been able to get to in person was Wednesday night's game against the Florida Panthers. No practices, no other games.

Why? Not because I've suddenly stopped caring or woke up and decided to half-ass it from now on. No, life has simply gotten in the way recently and I've been occupied with that instead of being down at Rexall.

But enough of Lifestyles of the Moderatley Poor and Famous (to his kids).

Thought #1 - Where the hell is Ryan Potulny? As you know, this is the guy I went out on a limb for when making my 13th forward prediction back in August. So far at camp he's gotten into one game, in Vancouver, and according to the media guys I've asked who were there he played pretty darn well.

He didn't dress for either game against Florida which I took to mean "no worries, the Oilers just wanted to allow some of the farmhands like Goulet, Sestito and Spurgeon to get into another game before they sent them to Springfield". And that sort of makes sense except for one thing: Having not played yet (aside from the one game) no one is talking about him or even mentioning in him as being a consideration for the roster. Well no one except me I guess.

Hell, Wednesday night I must have looked like a fly fisherman up in the pressbox as I kept casting out Potulny's name to anyone and everyone I spoke with.

"Has to be in the mix doesn't he Matty?"... "Hey how were your holidays Rob Tychkowski? You know Potulny has to clear waivers eh?"... "Doesn't it make sense to you Corey?"...

Instead all the talk is about Schremp and Brule and considering the way they've played so far, I can sort of understand it. I just have to believe that Potulny is going to play the next few games in order to get a fair shot at showing what he can do. No one is talking about him yet because no one knows much about him. I still think he makes sense but I'll admit that right now... it's not looking too good for him.

Thought #2: Can a guy on the farm be the fan's 'whipping boy'? Holy cow the venom that has been directed Ryan O'Marra's way on some of the message boards, blogs and call in shows has been absolutely corosive. It seems like today every 1st round pick better be in the NHL by the time they are 20 or 21 or else the fans are going to be all over them. 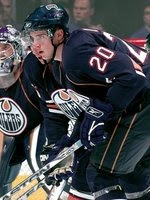 I'm not going to make excuses for him - he didn't play as well as he needed to in order to stay longer in camp. His speed was not good enough and he wasn't hitting the way he needs to in order to grab people's attention but there are some things the critics should keep in mind.

As Dean wrote, O'Marra was pretty ill during rookie camp. Cody Wild commented to me after the Florida game that he was feeling sick and I asked him if it was the same thing O'Marra had. "No I just have a cold but he had the flu, it was disgusting. He was throwing up between periods and stuff." All in all O'Marra lost 10 pounds and considering how he felt he must have played a bit like this guy from Slap Shot... 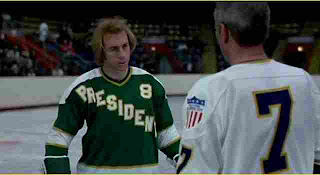 Many people seem to be in an uproar over the fact that he doesn't appear to be a player that will put up much for points. Quite honestly, the Oilers don't care... they are the ones who asked him to concentrate on defence and hitting. The Oilers have gone on the record as saying if Ryan O'Marra is going to play for them in the NHL, he'll be a 3rd liner - someone to shutdown the opposition and win key draws.

He only got 4 minutes of NHL exhibition before being sent down so it's pretty hard to tell how he did against NHL competition but in the UofA game he was dominant at the dot against the Bear's top centers.

He's got a lot of work to do to be ready for the NHL but the people who are jumping all over him at this point in his career need to relax. He might be a guy who follows the Kyle Brdoziak timeline - 5 years since draft day before playing as a regular in the NHL.

Thought #3: I'm not a fan of the Moreau/Pisani/Penner combo. Again I say that I've only watched the one game in person so it's a limited sample size... but I thought Penner was out of position way too often, especially in his own end. I was sitting with a couple of other media guys, one of whom brought it up first (I won't name him in case he doesn't want me to) so I can't claim to have originated this one.

Dean was guest co-hosting Just A Game on Friday and suggested a guy like Brule could center the 4th line with Moreau and Stortini on the wings bumping Brodziak up between Penner (on the left) and Pisani. To me, that makes much more sense than trying to convert a winger to the middle, especially considering how deep the franchise is right now with middle men.

Thought #4: Who is booking Florida's pre-season schedule? I want to assume that it's Jack Birch, he's Florida's Kevin Prendergast, but I like him and have a hard time believing he's to blame.

If you didn't know, FLA's schedule this week was CGY-EDM-EDM-CGY then fly to Prince Edward Island to play the NY Islanders. And rather than have a split squad, one in CGY and the other in EDM... they rode the iron lung back and forth! Hey whatever floats your boat but you'd think a team that could benefit from some public appearances back home might find a way to play some exhibition games back there.

Thought #5: Why is the season starting so late? I like the way they have condensed the pre-season but it makes no sense to me why the NHL can't just mandate that every year the opening night will be October 1st. Wouldn't providing fans that exact start date every year be better than what we have right now? Hey, this way the playoffs might actually be over by the time my kids are done school at the end of June.

Thought #6: Captain in Springfield - No insider information here because I haven't asked anyone but if there is a better guy to wear the 'C' for Jeff Truitt than Tyler Spurgeon I don't know who it would be. I suppose a veteran like Carl Corazzini or another heart-and-soul grinder like Tim Sestito wouldn't be bad choices but considering their history together, the fact that Spurgeon was proclaimed the most fit player at Oiler camp... what better example is there for other guys to follow? Plus Spurgeon was captain in Kelowna under Truitt during his tenure as the Rockets' bench boss. Makes sense on all fronts to me which is why I mentioned it here.

That's it. See? Lots of room inside my cranium for other random thoughts... I'll share'm when they come to me.

Hello Mr. Flaming,
Glad to see your still taking about potulny, I was really hoping he would be this years glencross. I am still new at this blogging thingly, but your article inspired me to write a little something about Potulny:

Keep up he great work Guy,