Saturday morning we were joined by 4 more guests and talked about an amazing story out of Prince Albert. Guy wrote about EA NHL 2011 yesterday so check that out, but here's a recap of the rest of the show.


We kicked things off with the story about PA Raider 16 year old forward Marc Mackenzie breaking up a burglary at his billet's house. Wow, that's amazing. Raiders President Dale McPhee must be extremely proud of his young forward, McPhee is also the Prince Albert Chief of Police.

Notre Dame Fighting Irish head Coach Jeff Jackson joined us to talk about an interesting event going on in Toronto this weekend. The Inaugural NCAA Collegiate Hockey Summit is a chance for kids and their parents to get information on the NCAA route. I think it's good and necessary for the NCAA to keep attracting players. As Guy pointed out the WHL has had a lot of success holding events in California. Jackson also told us about trying to bounce back from a tough season and off season. From arrests to players decommiting, it was a very honest conversation. His view on players backing out and how he's views a commitment. 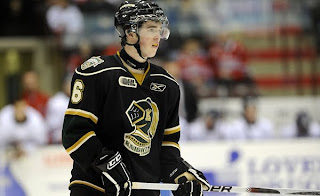 Scott Harrington was our 2011 draft prospect of the week, and would have been a player Jeff Jackson would have tried to recruit. Harrington plays for the London Knights but leading up to the OHL draft he told most teams he was going the college route. The Kingston product changed his mind after London took him with a late first round pick. Harrington suffered a tough injury at the start of last year and his hoping with a full season he'll be able to show scouts what a solid all around Dman he can be. He might not be a big hitter, but rather a guy who uses his stick and angles really well. His idol is Nick Lidstrom. (Photo: Aaron Bell OHL Images)

Gene Principe of Rogers Sportsnet gave us the run down on Oiler camp as well as who stood out in Penticton. There was certainly more to talk about then just the big 3. If Eberle and Paajarvi had a year under their belt would Tyler Pitlick have a chance at making this team this year? How did towering Dman Martin Marincin look?

To hear these conversations and our thoughts on some rookies trying to make rosters in Florida and Toronto, just click here.
Posted by Dean Millard @ 12:30 PM