This coming Tuesday, September 7th, marks the first episode of The Pipeline Show's 6th season. Traditionally that means that we will have the player we think will be chosen 1st overall next June at the NHL draft, and that is the case once again this year.

On top of unveiling who we believe will be taken 1st overall in 2011, we are really excited to make a major announcement concerning the future of our show. 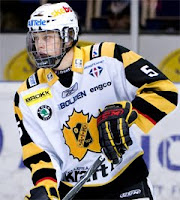 Not to pat ourselves on the back too hard but, in the three years that we've made the prediction we're 100%. 2008 was Steven Stamkos, John Tavares in 2009 and last year Taylor Hall made his TPS debut on the first show of Season 5.

So who do we think will go #1 overall next June? The consensus are that there are three top candidates for that honor: Swedish blueliner Adam Larsson and forwards Sean Couturier (Drummondville) and Ryan Nugent-Hopkins (Red Deer) are widely considered the big 3 right now. 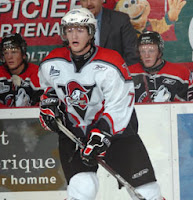 But the question is, who is on the premiere of Season 6 of TPS on Tuesday?

Is it really one of those guys or do we have someone else in mind? Brandon Saad perhaps? What about Seth Ambroz? Shane McColgan? Gabriel Landeskog? How about David Musil?

Sorry, you'll have to wait to find out. 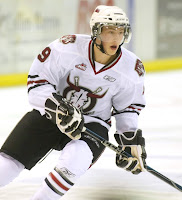 As for the Major announcement; it's something Dean and I have been discussing for quite some time in a variety of different ways. Now we can finally make it public and we will... on Tuesday. Suffice to say that we're really excited about it and look forward to the big unveil.

Join us from 7-9pm (9-11pm Eastern) on Tuesday to be a part of a huge event and a milestone night for The Pipeline Show.
Posted by Guy Flaming @ 3:06 PM

No one has told you yet? You're our new OP. see you Tuesday night LT.

Guy: lol. No worries. I've lined up Mikael Youkov as your first guest. :-)

You're still holding that against me??

Hey I got you Dragan Umicevic!

Looking forward to the announcement. Best of luck to you guys with the upcoming season.