What to do with Tyler Pitlick?

He could play in all 3 cities, even though he was just drafted this year. Because Pitlick played NCAA hockey last year with Minnesota State he could suit up in the AHL. During the summer the Oilers 2nd round pick (31st overall) jumped ship to the Medicine Hat Tigers of the WHL, and that's where most expect him to play, but is that the best for his development? 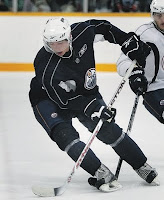 Pitlick will turn 19 on November 1st and plays a rugged style with his 6.02, 195 pound frame. So to me it's not inconceivable for him to play in the AHL this year. (photo courtesy Edmontonjournal.com)

Some say he's only played one year of college and he needs more time. The Toronto Maple Leafs and Chicago Blackhawks think one year is enough as they will both have Jerry D'Amigo and Nick Leddy playing pro this year after their freshman years of college hockey.

There is also word that Pitlick will play the wing in Medicine Hat. If he was in Oklahoma City, the Oilers could keep him in the middle.

At the very least I think Minnesota native could start in the AHL and see how he fares before joining Medicine Hat. After all, I feel that if the Oilers weren't already breaking in 3 or 4 rookies this year, Taylor Hall and Tyler Pitlick might have followed the same path as Matt Duchene and Ryan O'Reilly did last year in college.

Now don't take this as me thinking playing for Shaun Clouston and the Tigers won't develop Pitlick, because the Tigers are going to be one of the best teams in the WHL this year, it's just that if Pitlick were to succeed in the AHL this year, then you could pencil him in for the 3rd or 4th line centre battle next year along with guys like Chris Vande Velde and Ryan O'Marra.

He's looked very good, but it is also very early. I'd hope the Oilers would send him to the Hat, let him get comfortable and post some stellar numbers.

The fact that he'll play wing most games isn't a huge deal imo. He CAN play center and eventually will move into that slot.

The important thing is that he plays at a level where he can have success. He'll get a lot more playing time (my understanding is that college freshman don't get a ton of minutes) and should be able to make a difference.

I have no idea what kind of opportunities he'd get with the Tigers or Barons. You have to figure though that he'd get more icetime and situational play in the WHL, and he could do things to develop his game and experiment that he would never get away with in the AHL.

That said I imagine the WHL is the place for him. Get his confidence up, his offensive game coming along, and take it slowly like LT said.

Horcoff stated that the year in the SEL he did things he'd never think about trying in the NHL, and it did his offensive game a world of good.

I am against him playing in the A. Not many 19 year olds succeed in the Ahl. I very much want him to go Whl. He will get top line minutes.

Let him rip up the WHL. And the WHJC.