Here's a quick run down of tonight's Pipeline Show, which can be heard from 7-9 pm mst on the TEAM 1260 in Edmonton or online www.thepipelineshow.com.

We'll kick things off with the head coach and GM of the Halifax Mooseheads Cam Russell. They have the top two penalty minute players and the top goal scorer so it should be an interesting year in Halifax. They also have a player who's being touted as a top 3 pick for 2012, we'll tell you who tonight. 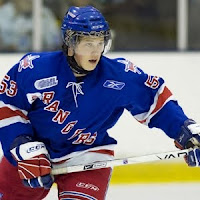 The Carolina Hurricanes will have some interesting decisions to make when the regular season rolls around. Do they keep this year's first rounder Jeff Skinner or send him back to Kitchener of the OHL? The Canes signed Skinner to his entry level deal today, does that signal his future? Do one of Zach Boychuk or Drayson Bowman make the BIG club? And where does Riley Nash fit in their plans? Carolina's director of amateur scouting Tony MacDonald will be our guest.

Matt Nieto is a freshman for Boston University and is eligible for the 2011 NHL draft. The small skilled forward had a great couple of years for the US National development team and might be one to watch for this year's World Junior Championship.

With the WHL season getting going later this week, we'll chat with Jordi Weidman of the Edmonton Oil Kings about upcoming events on and off the ice this season? Is the team where they want to be 4 years into the league? Has their demographic changed over time?

These guests and lots to talk about tonight starting at 7 pm mst. Email any questions pipeup@theteam1260.com.
Posted by Dean Millard @ 9:45 AM