Oil Kings Cut Down to 35 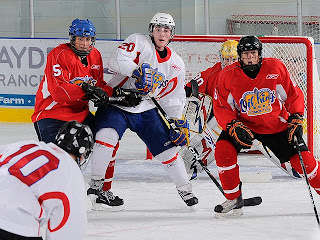 The Edmonton Oil Kings have chopped dramatically and are now down to a workable number of players as their WHL exhibition schedule draws near. 35 players remain in camp of which there are a few '95 born players who won't be with the team when the season starts.

Here is a look at who remains and what battles for spots might be looming.


There are three goalies left in camp with absolutely no drama unfolding as both Cam Lanigan and Laurent Brossoit are no-brainers to be the regulars for the Oil Kings this year. 2010 draftee Tristan Jarry is still with the club but the 15-year-old will eventually head back to B.C.

With Lanigan leaving in a little over a week for Penticton to tryout with the Calgary Flames, I'm wondering if Jarry sticks around that long or if the team will bring in another goalie. Perhaps they won't need to for the pre-season games against Prince George on Sept 10-11th and Red Deer on Sept 17th.

On the backend, 11 players remain after 4 were sent back following the Red/White game on Wednesday. Griffin Foulk, Cody Pettapiece, Stephen Shmoorkoff and Robbie Cameron were cut leaving an array of realistic contenders for 7 or 8 spots. 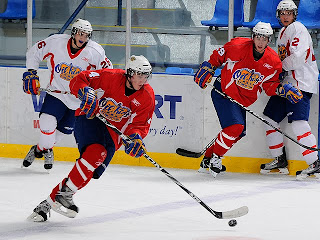 We know that Mark Pysyk and Griffin Reinhart are on the team, without any question, as are Keegan Lowe (above) and import Marek Hrbas. Jesse Pearson, back to form after missing last season with concussion problems, will be there. One would expect Adrian Van De Mosselaer to have be there after his lengthy tenure with the club however, as I explained a couple of days ago I don't know that he's a lock. Braeden Laroque should be well in the mix and both Ryan Dech and Ashton Sautner are trying to claim a spot too. The final d-man still in camp is Mason Geertsen who was a 1st round pick in the 2010 Bantam Draft and not eligible to play as a regular this year. Lane Werbowski, a 3-year vet, was scratched from the red/white game and I have no idea where he fits in because he's about 9th on my list at this position.

This might be the team's deepest area and GM Bob Green might be able to deal from strength here to address other problems. 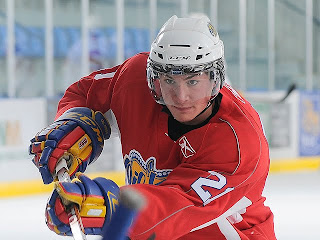 For me the top 11 or 12 are pretty easy but it gets muddy after that. I like Josh Lazowski and Josh Koper, two guys who played for Steve Hamilton in Spruce Grove (AJHL) last year. Does the fact that their former head coach is now with the Oil Kings help their cause?

Mitch Moroz is good enough to make the team but hasn't shown his best yet at camp. Jordan Kochan has some experience in the league but was expendable for Prince Albert.

- The list of players who wore Oil Kings threads last year who are not back with the team for 2010-11 is rather extensive. 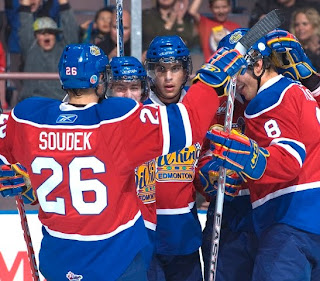 4 players were traded away last year: Tomas Vincour and Brett Breitkreuz to Vancouver, Brent Raedeke to Brandon and Clayton Cumisky to Everett... In the off-season both imports from the end of 2009-10, Robin Soudek and Sebastian Svendsen, were dealt to Chilliwack and Prince Albert respectively... Garry Nunn, Drew Nichol and Torrie Jung have played out their eligibility and have moved on. Nichol has joined the Alberta Golden Bears and Jung is now with the UBC Thunderbirds, both in the Canada West Conference of CIS hockey... defenceman Henrik Tervonen left the team and Devin Balness was cut mid-way through last season... This fall sees that Tyler Hlookoff, Cameron Maclise and Logan Proulx are all done with the team as well. Proulx has gone back to the BCHL's Trail Smoke Eaters...

- How bad were things last year for Edmonton in the WHL? The returning player with the best plus/minus rating from 2009-10 is Griffin Reinhart who boasted a +3 in his 2-game 2009-10 stint.

- If you were a betting person: Which Oil King player gets drafted after Mike St. Croix next June? Or will it even be before St. Croix?? Your candidates right now: Klarc Wilson, Keegan Lowe, Laurent Brossoit and Travis Ewanyk.
Posted by Guy Flaming @ 12:52 PM