The hockey season is now here in the CHL with all 3 leagues underway. So it's time to bring back Top 5 Tuesday's. Today I will stick my neck out with some predictions for the current WHL season. Enjoy.


5. Ryan Nugent Hopkins will lead the league in scoring and try to end the WHL's draught at the top of the NHL draft. It's been 14 years since a western kid went first overall. He'll face stiff competition from Sean Couturier and Adam Larsson, but he has already impressed scouts with his outstanding play at the Ivan Hlinka and a strong start to the season. Brett Connolly and Cody Eakin will score 50. Griffin Reinhart and Troy Bourke will be the ROY nominees. Kent Simpson will lead the league in gaa and wins.

4. Ryan Murray will make Team Canada's World Junior Team, a year before he can be drafted. Unlike last year when Tyler Seguin didn't make the team, all 3 high profile draft prospects will be in Buffalo. Nugent-Hopkins-Sean Couturier of Canada and Adam Larsson of Sweden. Nino Neiderrieter doesn't return to the Winter Hawks, instead he helps a young stable of stars try and return the Islanders to past glory...kind of like what might happen in Edmonton. Can we relive the 80's with the Oilers and Islanders in a few years? Ok I'm off topic. The Winterhawks aren't as strong but are still contenders, especially if they make a couple of deals. Brayden Schenn does come back to Brandon, but the Wheat Kings with a young blueline and suspect goaltending feel the pain of a Memorial Cup host hangover. Schenn and Glennie trade talk happens all year. If the Prince George Cougars aren't a top 6 team in the west they will trade star Brett Connolly, as the Lighting like the sniper a lot for next season in Tampa. 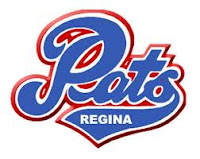 3. The Regina Pats will make a coaching change at some point during the season. Several have whispered that "if the team couldn't win with Eberle and Teubert, how will they make the playoffs without them?" Things aren't very rosey in the Saskatchewan capital right now, after Brent Parker handed over the GM duties to Chad Lang, word is Lang wants to put his own stamp on the Pats, and head coach Curtis Hunt is on a very short leash. If Curtis Hunt does coach them into the playoffs then he will be named coach of the year and obviously stay and maybe the coaching change is adding someone during the year to help out himself and Shaun Sutter.

2. Medicine Hat will meet Everett in the Ed Chynoweth Cup with Shaun Clouston in his first year as Head Coach battling veteran Craig Hartsburg. The two Tylers lead a strong Tigers team as Pitlick becomes a power forward, and Bunz is a prime pipeman. Along with Emerson Etem's goal scoring Medicine Hat's offence is tough to stop. Everret has balance and skill everywhere, and they've added Landon Ferraro - and promptly made him captain - and Kent Simpson is ready to shine. The WHL Memorial Cup representative will be......

1. The WHL will announce future expansion, adding 2 teams to make a 24 team league. Some cities that are at the top of the list are Winnipeg, Penticton, Victoria, Naniamo. I can tell you the media, players and coaches were raving about the arena in Penticton. Winnipeg has been a no fly zone in the past in a hand shake agreement with the AHL about territory, but since Abottsford moved into the neighbourhood maybe that's changed. The Island has been talked about by Ron Robison in the past. Do they go back to familiar territory in the capital city, or do they try something new with Naniamo?
Posted by Dean Millard @ 11:00 AM

the arena in penticton seats 5200 fans and not 2200.It is the nicest arena you will find anywhere in junior A hockey..

I have heard it is a great rink...the one in Camrose is very nice as well, I wish more rinks were like those two. Thanks for the heads up, the info I found on the web said 2200, which seemed a little small for such a nice arena.