RNH Impressive on Night one 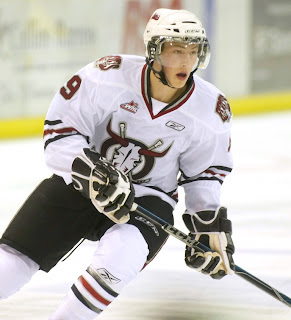 Friday night the Red Deer Rebels convincingly beat the home town Edmonton Oil Kings to kick off the WHL season. It was also a statement game for 2011 draft prospect Ryan Nugent-Hopkins who dazzled scouts with his wicked fast release, sweet dangles and elusiveness.


The player some think might go first overall this June, scored a beauty of a goal using his lightning quick release in the first period. RNH shoots the puck like Joe Sakic and has a Gretzky like way of avoiding hits. Now let's not get confused and think I'm comparing his overall game to Gretzky, just the fact that he was rarely touched on this night. He turned a number of defenceman inside out while leading the Rebels to a 4-1 victory.

'RNH' has a good chance to lead the league in scoring this year, and it was funny speaking with him after the game as he thought he didn't shoot the puck very well as he felt he put it in the goalies chest all night long. The thing is though, the Rebels- who want him to shoot more and for good reason - will likely score more goals off his hard and fast shot then they will off his passes, although he does like to set up guys a little more and did that nicely a few times Friday night as well. 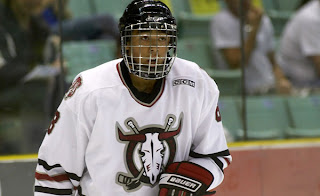 RNH is eligible for 2011, and this is a guy we were telling you about last year, so we'll keep that going this year and let you know about a guy to watch for 2012. Matt Dumba (above), the Rebels first pick 4th overall in the 2009 WHL draft has a lot of potential. He picked off a pass and put a laser beam top shelf on Cam Lanigan Friday night. The 6.00 172 pound rearguard has tons of offensive instincts and sometimes it can get him into trouble, like Friday night with several giveaways, but that can be reined in. If the Rebels finish in the top half of the conference this year, Dumba will get a lot of consideration for rookie of the year.