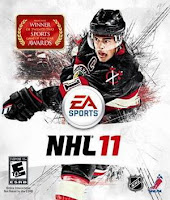 You'll recall when College Hockey Inc. Director Paul Kelly was on our program back in May and he told us that negotiations were on with EA Sports to include NCAA hockey in their popular NHL game series. (If you don't, here is the link to that story).

With the recent release of NHL 11, it's obvious that a NCAA component did not make it into the game. However, we had Andy Agostini from EA Sports on The Pipeline Show on Saturday morning (you do know that we've added a second live show each week on Saturday mornings right??) and we brought the subject up again with him.

So will there be NCAA Hockey in NHL 12?

"We never say never in our group," Agostini began, "As of right now we're just starting to look into the future for NHL 12; the development has already started and people are picking out what we are going to be doing for the next project. Every league in the world is something that we mention at the beginning of the year, some more than others due to size or popularity. Definitely [it's] always up on that bulletin board of 'Here's All the Features We'd Like to Put In' in the future. At this point... not... the list hasn't been completed so yeah, there's no real time-line for anything as of right now."

I'm not sure if that is an answer that will excite many NCAA fans who were excited after Kelly's proclamation that something was in the works.

From EA's perspective, it sounds like anything is a possibility but, and perhaps I'm reading too much into it but... there was no indication from Agostini that the NCAA was much closer to being a reality than the German 2nd Division or the KHL. I didn't get the sense that there was an impending agreement on its way like I was after Paul Kelly's comments in May. 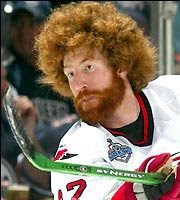 As for the NHL 11 version, the addition of snapping sticks is just an example of the added realism EA Sports has injected into the game. We came up with two more suggestions for NHL 12: Ice Girls and playoff beards that gradually get longer as a team advances to the next round. The latter was suggested by a listener via email, and it's a winner in my opinion.

Any other things you would like to see added to the game for next year?
Posted by Guy Flaming @ 11:58 PM

The game is terrific, and we talked with Andy about a lot of the new game modes, from a full CHL season to playing in the Memorial Cup, to the GM mode where the actual CBA comes into play..it's the closest thing to being a GM.

I'd love to see playoff beards and ice girls...it's come a long way since pong...

I would like to see a more in depth free agency battle. For example on NFL head coach the is an actual bidding war between teams for higher level free agents. Rather than the player letting you know his intentions after he made his decision. That would be kinda cool.

Fix the bugs such as player freezing, and goalie not being able to get back to the net and the awful goalie passing. Also, when the difficulty is raised, don't thwart the players efforts but rather make the cpu better at the game itself-that is probably the most annoying part. Also a more realistic team celebration after scoring a goal would work very well. Generally, more realistic movement and flow of the players skating would make this game much much better

I would like to see more options to the creation zone like more jersey and sock styles and being able to create a goalie mask. I think that NCAA in the game would be awesome, do something along the lines of the be a pro mode. Do something like start in college and work your way up to the NHL. Also, goalie fights would be pretty awesome as well. I love the playoff beards and ice girls idea.

i would like: when theres a timeout we see players goalie going too the bench ect... crowd needs too bee more realistic when im away and score a goal they should booooh! we also NEED a new commentator!! thats for sure but pierre houde added in it would be cool but that one is ma opinion add more stuff during game stoppage like offsides icing you know we should see players do things info on them lets say its bein 12 games he hasint scored or something you know and also for the commentator if possible for him too have more too say and more real like when i shoot from my zone i dont want too hear OH WHAT A SAVE i mean come on, REALISTIC isint hard too come up with because all you gotta do is make it look like it does for real in real hockey also if possible lets say you do a trade you should see him gettin welcomed and also news papper gazettes of hockey highlights lets say subban scores in o.t would end up being the 1st page kinda thing aniways these are my opinions i think it would add alott of gamers 2 play the game what do you guys thing would you be able too work on ALL of this? or is the cost too expensive?

I completely agree with what italian_mingia_bro said. The goalie fights were in NHL 04. I also loved the celebration when you won the cup in 04 it included the team picture and then it went through each players stats that postseason. I think Randy Hahn from San Jose would be a good choice as a new commentator but only if they let him commentate like the way he does in this video. http://www.youtube.com/watch?v=GdgYuJfFVxU

Him screaming "goal" like that especially at the end of the game makes me excited everytime I watch the Sharks. They tried him in the 2K franchise but it's not the same. He doesn't sound excited. They need him to be excited like he is there.

My suggestion- make the crowds more realistic. There's nothing more exciting that an NHL playoff game- make the crowds more into it. Make scoring goals more intense, realistic, and exciting. As for the commentator, EA would be my all-time hero if they had Mike Emrich do the play-by-play. Listening to him call the olympics/stanley cup playoffs is always exciting. Maybe some other changes too- sound effects, player movement, etc. Can't wait to see what EA has for NHL12.

some things I'd like to see that I think would make the game even more exciting..

1.New Announcers - Everyone is sick of Gary Thorne, and the dude can't even say half the player's names right. I myself, plus a ton of other people, would settle for Jim Hughson

2.Customizable Goalie Masks - I know there is licencing on official masks by the artists but if there is a customizable feature I'm sure people can make similar masks to their favourite goalies (i.e Wolf heads, Eagles, Tony Hawk-type Customization)

3.EA Game Face - Will enhance the experience of having your own face in the game!

4.Uploadable Roster Image - To give the Be A Pro experience a more authentic feel.

5.New Game Engine - Don't get me wrong, I love the NHL10/11 engine but to amp up the game a little more I'm sure there is more realistic graphic capabilities out there to add to the authenticity of the NHL.

6. Crowd Simulation - It wouldn't be the end of the world if this didn't change but if there were a way to get more realistic crowds in the game that would be a plus.

7. Playoff Beards! - Again, adding to the likeness of real life. Having a clean-shaved face in the finals is pretty ridiculous. Have more than one beard available if its a customizable feature.

10. Uploadable Content for Create-A-Team - So gamers can have free reign on customizable options.

Regardless of what happens I'm still more than stoked to see what NHL12 will bring, and am looking forward to next season