Remember last month how Paul Kelly and College Hockey Inc. were mysteriously absent from the World Hockey Summit in Toronto? We had Mr. Kelly on the The Pipeline Show that week to discuss the matter. Well, the NCAA will get its time in the Ontario limelight after all as College Hockey Inc. has created the “NCAA Collegiate Hockey Summit” for this weekend.


It's really short notice to the media but the NCAA booster group has released the news today that about 70 players in the Toronto area, by invite only, will be showcased for a number of top NCAA coaches. 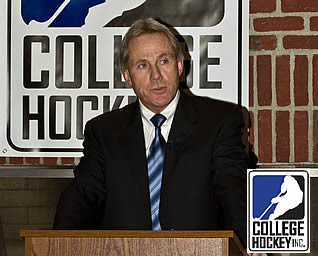 Here is the contents of the press release sent to me by Paul Kelly this morning:

"On Saturday September 18th, approximately 70 of the top '94 and '95 hockey prospects from Greater Toronto will be participate in the inaugural “NCAA Collegiate Hockey Summit” at the Chesswood Arena in Toronto. The invitation-only Summit will showcase many of the top-rated hockey prospects from the Toronto area and feature college coaches from top NCAA Division 1 hockey programs including: Boston College, Boston University, Cornell, Harvard, Michigan, Michigan State, Minnesota, North Dakota, Notre Dame, Princeton, Providence, RPI, Wisconsin and many others. Current and former NHL players and other NHL personnel will also participate in the event.

College Hockey, Inc., which is headed by former NHLPA chief Paul Kelly, organized the Summit and as part of the program will conduct an informational presentation to the players and families about the various career alternatives available to elite young players, and the benefits of the NCAA college hockey path. Kelly stated that "College Hockey is elated with the support and interest we have received from the players and their families about this NCAA Summit. It is clear that these talented players are eager to learn more about the hockey and lifetime opportunities that stem from playing NCAA hockey. As for the college coaches, I know I speak for each of them when I say they are anxious to evaluate these talented prospects and hope that a number of them will consider becoming part of their respective hockey programs.”

Kelly stated further that College Hockey, Inc. plans to continue to contact and monitor the progress of these Toronto area players throughout the coming season, and to hold similar collegiate summits with elite prospects in other locations across Canada.

College Hockey, Inc. is the informational and marketing arm of the 58 colleges that play NCAA Division 1 men’s ice hockey. Contact information is noted above."

It's interesting to note that this will be the first of a series of cross-Canada events. One would have to assume there will be similar "summits" held in British Columbia and Alberta to include the swarms of BCHL and AJHL players that eventually go on to make up about 20-25% of the NCAA's players.

I wonder though how this differs, if it does at all, from the AJHL's upcoming Showcase event where every team in the league heads to Spruce Grove to play 2 games over a 3-day period. The stands are full of NHL and NCAA scouts for that event as every team is in action at least twice and under one roof so it's ideal for the talent scouts and recruiters to get a look.

Speaking of which, I know Paul Kelly and College Hockey Inc. are expected to make an appearance at the AJHL Showcase but I'm told he has yet to confirm his involvement. That would be pretty unfortunate considering the weekend's popularity and importance to both the league and to NCAA teams. It seems like a golden opportunity for he and College Hockey Inc.
Posted by Guy Flaming @ 12:24 PM

The email (asked for anonymity) reads:

"I have this niggling feeling that College Hockey Inc. doesn't give a hoot about Canadian players in general (except maybe the super-elite it would like to nab for its programs). The organization seems far more focused on preventing American players from playing in the CHL. Thus, I wouldn't expect Mr. Kelly to show any real interest in the AJHL showcase. After all, it has been going on for a few years now without his involvement."

Some interesting feedback there, isn't it?

It really isn't interesting at all because Paul Kelly's position and College Hockey, Inc. were just created this year. Therefore, he had no reason to be at the AJ showcase in past years, if that was the implication. Either way, College Hockey, Inc. wouldn't be spending time and resources on the summits if all it cares about is keeping Americans from playing in the CHL. The obvious goal is to inform high-end Canadian players on NCAA hockey in an attempt to get them to play there. If College Hockey, Inc. didn't care about Canadian players, it wouldn't be holding the summit. It knows Canadians are a vital part of a quality NCAA hockey product.

The interesting part was the parent's observance that from Canada, until now, most of what we've heard from College Hockey Inc is "CHL is bad" as opposed to "NCAA is good".

It's something we've been talking about on the show for a year and a half and have mentioned directly to Paul Kelly.

I definitely agree w/that. The argument that the CHL is bad just isn't one that College Hockey, Inc. can win or should bother making. It's definitely refreshing to hear that it has changed its tone, if that in fact is the case. I think everyone is sick of hearing the two sides go back and forth.