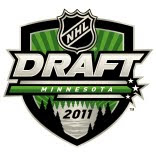 We recently spoke with North American Central Scouting head man Mark Seidel about 2011 NHL draft. Yes we are many months away, but here at TPS we never stop looking ahead to the future of the game.

We wanted to talk to Mark about some key players to watch for this year, and while it seems like a 3 horse race, if Mark was picking today he does have a clear cut number one. Once again we're talking about September here, and a lot can change during the course of a season. With that said, here's who Mark likes right now.


"For me I would take Adam Larsson just because defence is such a critical position. They're so hard to find and if you can get a franchise defenceman they're so much more valuable then a franchise centerman."

I asked Mark about another blueliner in the draft who plays in Saskatoon. If you haven't seen Duncan Siemens play yet, get to a WHL rink when the Blades come through town and watch this kid skate. That's what Mark recently did.

"I took a trip out to Saskatoon so that I could see their inter-squad scrimmages because I loved this kid so much from last year" said Seidel. "This kid has a chance to jump in the top 5, when you have a defenceman who can skate and is big and strong, this is a phenomenal prospect."

As for last year's draft, Mark chimed in on what the outsiders perspective is of Taylor Hall wearing #4, which has only been worn by one other Oiler, Kevin Lowe.

"One of the things he felt was important was wearing number 4, and it was early issue as soon as Edmonton took him. A lot of guys in the National Hockey League were adamant to Kevin Lowe, do not give up that number, but he got a lot of pressure from everywhere and as a result he's given it up"

For more more Mark Seidel on the 2011 draft and the first overall pick from 2010, click here to listen to the full conversation.
Posted by Dean Millard @ 10:36 PM