The Alberta Junior Hockey League's marquee event (or one of them this year) will not include a visit from College Hockey Inc.'s Director Paul Kelly after all. Although the former NHLPA executive and the league have discussed combining their efforts for the 3-day event (Sept 30th-Oct 2nd), and the extra media attention it would have garnered both groups, it won't be happening this year.

But that's OK and it makes sense... let me explain.


AJHL Vice-President of Marketing Ryan Bartoshyk confirmed for me today that there was an opportunity for College Hockey Inc. to have a presence at the 2010 AJHL Showcase in Spruce Grove but that it wasn't deemed to be "the right fit".

"They got in contact with us last week," said Bartoshyk, "It would have been their educational guy, Jeff Dwyer, coming up and I didn't think it was the right time or essentially, the right event for them to be at."

Dwyer, a former 6th round selection of the Atlanta Thrashers who played 4 years of pro hockey after 4 years at Yale, has been putting on information clinics letting young players know the virtues of the NCAA route. (hear one he did in California here.)

The AJHL is full of players who already are well aware of their NCAA options, and most have clearly chosen to pursue that direction if they can earn a scholarship, it does seem like an odd place to have Dwyer set up. It would be like Georges Laraque giving a speech about the benefits of being a vegetarian to a room full of Vegans. What's the point?

"There might be a better opportunity with some younger players, like say with a Midget Hockey group or a Midget Tournament where we could provide [Dwyer] with that opportunity." Bartoshyk said. 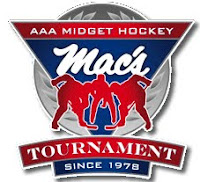 I wonder if maybe the Macs Midget Tournament during the Christmas season would make the most sense. That event brings in teams from all across Western Canada and some U.S. locales to Calgary and it's an extremely high profile showcase on the calendar for Major Junior, NCAA and NHL teams too. With programs like the Notre Dame Hounds and Shattuck-St.Mary's being represented in the past, it's a tournament of significant importance at that age level.

Something to keep an eye on for sure.
Posted by Guy Flaming @ 11:28 AM