Glover walks out on Warriors 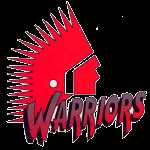 Just days after the Moose Jaw Warriors sent 20 year goaltender Jeff Bosch to the Kamloops Blazers, the Tribe is on the look out for another pipeman as 18 year old Brandon Glover has gone home to Victoria. Glover has reportedly asked for a trade as he didn't think the Warriors were going to give him the opportunity to be a number one goalie.

After trading away Bosch, director of hockey operations Alan Millar brought in 20 year goaltender Thomas Heemskerk from Everett, which one would have to think set Glover off.

Moose Jaw also has 17 year old Brandon Stone as an option, but he played less then 25 games in midget last year.
Posted by Dean Millard @ 10:30 PM

Yeah, that's the way to play more. Get into a pout and walk away from your team, don't try to earn the spot with your play or anything.

I'm so sure WHL teams are crawling over themselves to get a mediocre goalie who only wants to start.