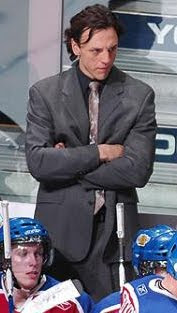 The Oklahoma City Oil Barons have rounded out their coaching staff by hiring former Edmonton Oil King assistant coach Rocky Thompson to do the same job in OK City.

Thompson coached with the WHL team for 3 years before getting let go this past off season.

This will mark the 3rd time Thompson has been associated with the Oilers organization - they also own the WHL's Oil Kings - as he played for the Road Runners when the team operated their AHL franchise out of Edmonton in 2004.

Thompson told me tonight that head coach Todd Nelson wants him down in Oklahoma City right away to start putting together a game plan.
Posted by Dean Millard @ 9:47 PM

the saturday shows are going to be on the podcast, right? I hope so.

ps - we are looking forward to an interview or two down here in Portland this season...

Yes... this weekend was the exception because I had to zip from the station to a wedding.

I'm archiving the show as we speak.

This is the first time in 6 seasons that I've been this late but in the future, you can hear the TEAM 1260 podcast by visiting the station's site.

This year, I'm sure we will be keeping close tabs on the Winterhawks too.