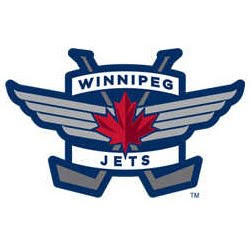 The Winnipeg Jets unveiled their new logos last Friday and as we mentioned on Twitter the day before, they are indeed blue, red and silver. There has been a lot of talk about the new look and while I think a lot of fans were hoping the team would just use the old cresting, I'm sure people can understand the financial necessity to re-brand the Winnipeg Jets.

The club will make a mint on the initial rush by Jets fans (old and new alike) as they seek to adorn themselves with the latest hats, jerseys and other paraphernalia. The die-hard fans already have two or three classic jerseys so the team needs to find a way to sell to that group and, this is it.

If you care, my thoughts on the logo designs come next... 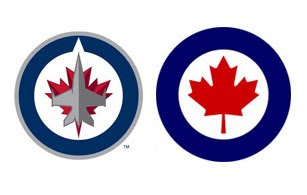 Full disclosure: I'm an air force brat. I was born at CFB Chatham, NB (now closed) but grew up at CFB Cold Lake, AB from the time I was 4 years old until I graduated and moved to Edmonton. The Canadian Military, and the Air Force in particular, have a special place in my heart. My mother still lives in Cold Lake and her house is situated perfectly along the flight path pilots take as they come in to land. They'll drift by seemingly just a couple of hundred meters away, a treat for many outsiders that I took for granted while growing up there.

The new Jets logo was instantly familiar to me. The red maple leaf inside a blue circle, the roundel, has been a Canadian Air Force emblem for many years. I'd seen it, minus the inlaid jet, stitched or stuck on everything from books to flags, awards, door panels on vehicles to signs all over the base. And yes, even on hockey jerseys. In fact, the name of the arena on the base in Cold Lake was actually called The Roundel (that may have been the adjoining curling rink... I was little).

I may be biased but I quite like the circular Jets logo. The CF-18 Hornet is the fighter jet of my teenaged years, seen regularly in the skies around Cold Lake since the early 1980's.

If I'm going to nitpick about the logo it's for two things, and they are both very minor. Firstly, the most appealing feature of the F-18 to me has always been the tail fins that slant outwards as opposed to straight up like the US F-14 Tomcats in Top Gun.

Unfortunately, the new Jets logo doesn't show off that particular feature at all. It's a small thing, I agree.

The other minor beef I have was harder for me to pin down. I knew there was something and that it had to do with the maple leaf but I couldn't quite put my finger on it. Was it too small or the jet too big? Maybe it was that the top of the leaf was obscured by the nose of the jet? But no... I finally figured it out.

The stem of the leaf is depicted as a point so it almost makes the rest of the leaf appear upside down. I'm a bit confused as to why they chose to do that. It's a squared off stem in the original military version just as it is on our National Flag. The Toronto Maple Leafs crest has a squared off stem too. I Googled around a bit just to satisfy my own curiosity and had a hard time finding any Canadian emblems or corporate logos that featured a point stem on the maple leaf. 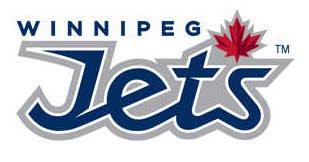 I'm less enthusiastic about the third picture released though. A simple "Winnipeg Jets" script with a small maple leaf is not very imaginative or exciting to me but I suspect that was the goal. Sometimes the best logos are the simple ones but those are usually pictures of some sort as opposed to words or lettering.

As for the logo at the top of this blog entry... I give that one a thumbs up. It reminds me of something an Air Canada flight attendant would give a kid on his first plane trip. Classic pilot wings, makes for a cool insignia.

Overall I'm pleased so far but I want to see the complete jersey before I settle on my opinion. The only red in the logo is the leaf itself so does that suggest that the colour scheme of the uniform will be mostly blue an silver? I'm fine with that, a Dallas Cowboys look is not something we see everyday in hockey, The Air Force program in NCAA and the OHL's Sudbury Wolves comes to mind but that's about it. 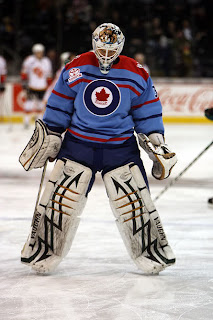 Perhaps the final product will be something along the lines of what Corey Schneider is wearing here. Back in 2008 the Manitoba Moose honoured The Royal Canadian Air Force Flyers who captured the 1948 Olympic gold medal. Considering how much of the Manitoba Moose has graduated to the new Winnipeg Jets, maybe it's not an unrealistic thought.

I'll be honest, the more I look at that picture the more I like it. If Schneider's pads, mask and gloves had matching colours, I think the overall look would be pretty damn sharp actually. I suspect they'd add silver in there somewhere since the new logos all feature silver/grey very prominently.

Look at the Thrasher T logo and maybe this sharp point of the maple leaf and the top point is in honour of the Thrashers. Tha is the only explanation I can think of in regards to why they made the stem a sharp point. It's very Thrasher esque.

Interesting observation Raine. I would hope that they didn't alter a national symbol as a salute to a now defunct hockey team though. But you might be on to something.

Re the sharp points on the leaf stem and the notch at the top of the circle it is meant to resemble a compass pointing north.

ugh! if you hadn't of suggested that here I would have never thought of a compass looking at that. That's really kind of a lame reason in my personal opinion.

to each their own. I like the logo overall aside from the two minor things I pointed out.

You're right phreload. The compass pointing north is representing the owner ship group True North. Not a big fan of that, but I suppose Winnipeg is north so I will think of it representing their location rather than ownership.