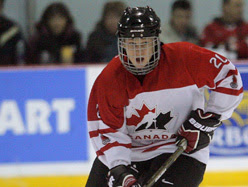 Thanks to TPS regular Kevin Forbes for the heads up who notified us that the QMJHL club in his backyard is about to land the next Big Thing. The Halifax Mooseheads have reportedly agreed on a deal that will bring in phenom Nathan MacKinnon from Baie-Comeau in exchange for two players and a trio of 1st round draft picks.

The Chronicle-Herald is reporting that something will eventually be done once the August 1st trade window arrives.

It's a lot to give up but Halifax can afford the price because they just dealt a USHL based prospect named Adam Erne to the Quebec Remparts for two 1sts and a 2nd round pick.

With MacKinnon joining Martin Frk, the Mooseheads will have two of the most highly regarded U18 players in the world on their roster.
Posted by Guy Flaming @ 4:26 PM