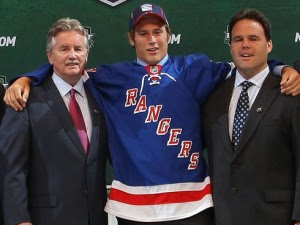 The Pipeline Show has now confirmed with the player himself that New York Rangers prospect J. T. Miller is indeed detouring away from his NCAA commitment to North Dakota and will instead play for the Plymouth Whalers in the OHL.

The Ohio product was chosen 15th overall by the New York Rangers last month at the 2011 NHL Entry Draft in Minnesota. His first appearance on The Pipeline Show was back in April and he confirmed to us back then that he would officially decide after the draft where he would play next year.

This is obviously a blow to the Fighting Sioux of North Dakota who have lost 6 of their top 7 scorers from last year to graduation or to pro hockey (Jason Gregoire).

We had asked Miller to appear on the show this weekend but after initially agreeing to do so, he opted to take a pass and join us at a date in the near future instead.
Posted by Guy Flaming @ 12:04 PM

Good job on the Miller story fellas but the question now is does anyone think if Miller is making the right or wrong move here?

Jess, I would like to know how much pressure was put on him to bolt and why would he think he is going to get better playing in the OHL as opposed to playing against older players in the WCHA. I wonder how much colusion there was in this quick decision?

I am pretty sure that the Rangers did not put any pressure on Miller to not play for North Dakota.

If anything it would be to the Ranger's benefit for Miller to have attended college rather than play in the OHL.

Playing 2-3 years at North Dakota then hopefully right to the NHL would allow for the max use of his ELC.

Gordie Clark who is the NYR director of player personnel is a UNH grad and member of the All-Time ECAC team.

Between Kreider, Stepan, and other college kids it does not make any sense to pressure Miller into playing in the OHL.

But being the Rangers boy are they getting blamed for something they did not do.

His decision to not enter his commitment to UND is puzzling and a direct reflection of his character. It's a puzzling move. UND is know for developing many players into NHL players.

To me it is how he has handled this move more than the choice itself. He opens up the door for people to ask questions about his decision making processes.

I hope for his sake that his talent can make up for his picks.

Could it be that he just changed his mind? Remember he is still a kid. We had hoped to speak with him, but just found out he didn't feel it was the right time to come on our show. it's to bad that a young player can't try both leagues and still be eligible in the other. Maybe if the NCAA allowed a player to still be eligible for college until 18 kids wouldn't be forced to make decisions at such a young age and 14 year olds wouldn't feel so much pressure.

Just my thoughts, and i'm sure we'll be chatting about this on Saturday's show.

I wonder if it might not be a hockey decision. Maybe he's just not a student.

That's completely unsubstantiated, he could be straight A's for all I know.

I've never had a team tell me they had concerns with UND so maybe it's more to do with academics.

Dean, there are a lot of us that are all for changing the rule but the powers that be have no intention of changing that rule.

Doesn't Title 9 prevent them from changing that rule anyway?

Anyway, I'm in favor of the move. I don't think it's a reach at all to suggest the CHL is far better at developing forwards than the NCAA. Even if UND is ahead of it's peers on that score.