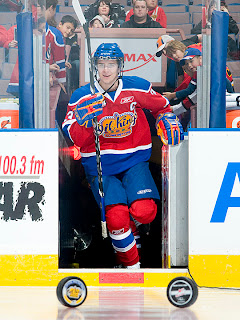 Tonight on the big show we got the latest on an upcoming huge trade in the Q, discussed some upcoming coaching hires in the WHL and chatted with an American forward heading to the BCHL. We also raised more money for the victims of wildfires and flooding in the Slave Lake, Alberta region.

Last Saturday we auctioned off a similar package with a Ryan Nugent-Hopkins autographed jersey and the winning bid came from O2's Taphouse in Edmonton ponying up $2800. Tonight we put up a Mark Pysyk autographed Oil Kings jersey, along with the Jasper Park Lodge golf and spa package, and a Moosehead prize package and thanks to One 9 Construction inc we were able to raise another $1600 for our cause. That's $4400 so far with one more auction to go on Saturday. We will have the JPL and Moosehead packages up for grabs along with a signed Tyler Ennis Buffalo Sabres jersey and thanks to our good friend Sam Cosentino a couple of autographed baseballs from Aaron Hill and Adam Lind!!!! That's Saturday from 10-noon mst. 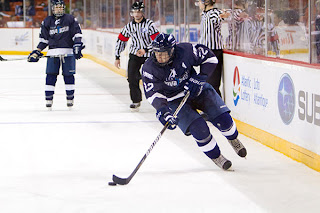 As for tonight we kicked things off with Kevin Forbes from Hockeys Future and Future Considerations who filled us on the impending trade that will send the next great Q player Nathan MacKinnon to Halifax from Baie-Comeau for a wack of draft picks. MacKinnon is the youngster who so many are comparing to Sidney Crosby because he grew up close to Crosby in Cole Harbour, went to Shattuck St. Mary's and is a star in the making. How will he fare in Halifax? Are the Mooseheads giving up to much? Will he make them an instant contender? All these were asked and answered in our conversation. 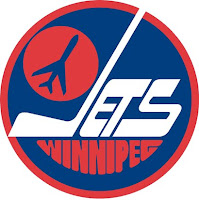 Our second guest is the newest member of the Winnipeg Jets, and a Winnipeg native. Jason Gregoire left UND early and became a free agent thanks to an NCAA/NHL loophole. He was a draft pick of the New York Islanders but didn't sign with them and hit the open market. Gregoire told us why he didn't join the Isles, how many other teams were involved and how meeting his idol almost swayed him to joining a sunbelt club. We also discussed the new version of the Jets and his days playing at UND including what a fantastic arena they play in.

From there we brought in Simon Larouche from Hockeyprospects.com. He's based in Chicoutimi and gave us his thoughts on LA Kings draft pick Christopher Gibson, taken 49th overall in Minnesota. Is he a steal as a 2nd rounder? Why did he drop? Could we see him shine at the WJC in Edmonton this year? We also picked Simon's brain about the MacKinnon deal. 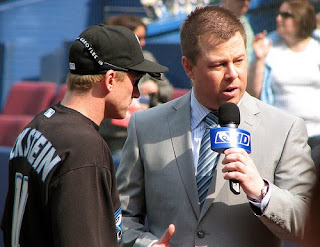 Sam Cosentino is our CHL insider and the Sportsnet analyst weighed in on the rumours of coaching hires in Regina and Moose Jaw. The Pats look to be zeroing in on Ryan McGill while the Jaw has it's clamps on Mike Stothers, or atleast it's being reported that they'll make it official tomorrow. We asked Sam about the Mackinnon deal and why trades can't happen during certain parts of the off season in the Q. Sam also promised to acquire and donate a couple of autographed baseballs from the dugout of the Toronto Blue Jays which we will add to the auction package on Saturday. We wrapped with wedding talk as Sam will tie the knot this September..congrats Sam...Twitter will be next.

Steven Forgarty is a player some Oil King fans were hoping to see in Edmonton this year, but the Minnesota kid and Rangers 3rd rounder is heading to Penticton to play for the Vee's of the BCHL. He's Notre Dame of the NCAA bound and the Rangers preferred the BCHL to the USHL. And wanting to keep his college options open Forgarty politely declined the Oil Kings offer to play at Rexall Place this year. He talked about his draft experience and what kind of player he is. 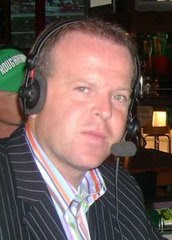 Our final guest is the voice of the Saskatchewan Rough Riders, former voice of the Pats and avid blogger Rod Pedersen. Rod broke the news of Moose Jaw's impending hire and also wrote recently about who the Pats are leaning towards. We spoke about both team's and their options and how they might shape hte future of the teams. Also what will the new rink in Moose Jaw look like and how will that impact the fan base???

All this and more money for our charity auction....with one more to go this Saturday. 10-noon mst...your chance to win wicked prizes and help out some folks having a tough year.