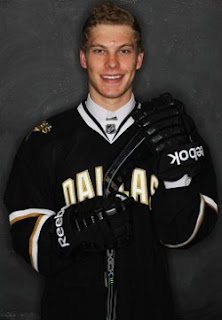 A busy week for Dallas Stars 1st round pick Jamie Oleksiak who officially left college for the CHL a couple of days ago and now has officially chosen Canada over the United States for his international hockey.

Canada's U20 summer camp begins next Wednesday here in Edmonton. A 46-man camp list has been out for a long time now but that was been bumped up to 47 yesterday by Hockey Canada as they added the 6'7 blueliner to the mix.


Oleksiak had an impressive start to the 2010-11 season at Northeastern and earned an invite to the December camp for the Americans where he nearly made the cut for USA's entry to the 2011 event in Buffalo.

Since then he was drafted, left college and joined the Saginaw Spirit.

There are spots up for grabs on Canada's blueline, especially for a guy his size. I'm not going to say that he's a automatic but considering Erik Gudbranson is the only returnee from last year among D-men, and he's likely going to be busy in the NHL, Oleksiak looks like a guy who fills that void.

Dressing for Canada in the U20s, a IIHF sanctioned tournament, would mean Oleksiak would only be eligible to play for Canada from that point on.
Posted by Guy Flaming @ 5:35 PM