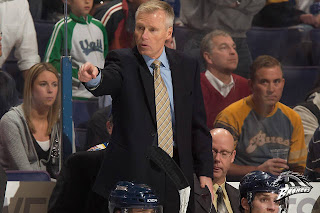 The Western Michigan Broncos have made a major hire today landing Andy Murray to be their new head coach. It's reportedly a 5 year deal that WMU secured Murray with as they looked to replace Jeff Blashill after the rookie coach left the program for the Detroit Red Wings a couple of weeks ago.

Here is the official release from the team.


Murray has been a successful coach at several different levels over his 30 year career. He's head coached in the NHL with Los Angeles and St. Louis. Murray has had stints with the Philadelphia Flyers, Winnipeg Jets, and Minnesota North Stars as well.

Internationally he has coached Canada to gold medals in the World Championships and in the Spengler Cup. He has also been part of the coaching staff for Canada in the Olympics. Murray was also on the bench at Shattuck-St.Mary's prep school and has collegiate experience in Canada with Brandon University.

His hiring comes at a pivotal time for the Broncos who are coming off their best season in a decade finishing with 19 wins and a .571 winning percentage. The club made it into the NCAA tournament losing in the opening round to Denver in an overtime heart breaker.

Jeff Blashill put the Broncos back on the NCAA map and there has been much talk about WMU joining the new NCHC in 2013-14. With Blashill leaving, I think it's fair to say that no one was really sure if the Broncos would continue to move forward or fall back to mediocrity. Today's hiring should be seen as a major positive step towards keeping the program on the right track.

WMU wasn't the only NCAA program to hire a new coach as Northeastern announced that Jim Madigan will be the Huskies’ new head coach. Here is the release from the school. Madigan replaces Greg Cronin who left the program for the NHL becoming an assistant with the Toronto Maple Leafs.
Posted by Guy Flaming @ 11:21 AM