Tonight we were joined by prospects of the Toronto Maple Leafs and Florida Panthers, the head scout for Hockey Canada, our CHL insider and a new member of the Winnipeg Jets. We also discussed a couple of new coaches in the CHL and NCAA and a player who left college for the OHL.

First up we chatted a little more about our amazing trip to the Jasper Park Lodge and congratulated our operator Taylor 'Sports Doctor' Medak on his teams' victory. I told the boys about a close encounter with a large black bear twice while camping in the wilds of Jasper National Park and we gave the final tally for our charity auctions to benefit the folks in Slave Lake. From there we discussed the hiring of Pat Conacher as Head Coach in Regina, Andy Murray at Western Michigan University and Jamie Oleksiak leaving Northeastern University for the Saginaw Spirit of the OHL. 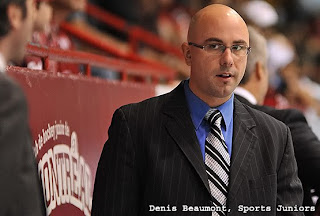 Segment two brought us new Winnipeg Jets Assistant Coach Pascal Vincent who told us a great story about how he was hired onto the newest NHL club. Pascal left the Montreal Juniors for the NHL and also had to say no to the World Junior team where he was an Assistant Coach. Vincent knows one guy on the Jets roster very well, and talked about what role he will play with the new team.

Speaking of Hockey Canada, head scout Kevin Prendergast joined us to preview the Under 18 camp coming up this weekend and the U20 camp next week. From a wide open race for the goaltenders to a stacked blueline and some goal hungry forwards Canada's entry into the Ivan Hlinka tournament should claim gold. There are some very high picks for the 2012 draft and some kids not eligible until 2013 who will be key cogs for Canada.

To kick off hour #2 our CHL insider Sam Cosentino dropped by and we wondered how Red Deer and Regina swapped scouts, as well as how the Pats will do with Pat Conacher behind the bench as well as who might surface behind the bench in Owen Sound. The roster for the NHL's Research and Development camp was released and I thought it was hard for the kids to play relaxed with so many GM's watching. Sam disagreed. We also threw around some relocation in the QMJHL.

Next up was Toronto Maple Leaf draft pick Tyler Biggs who played this year with the U.S. National development team. Biggs was captain and main power forward of the club and hopes to bring those attributes to the Leafs one day. He's committed to the Miami Redhawks and told us what led him there. We also had some fun with the fact that Biggs' father was a part of the greatest junior hockey movie ever made.

We closed the show with Quinton Howden of the Moose Jaw Warriors who will be in Edmonton next week for Hockey Canada's WJC summer camp. Howden was a member of last year's team that suffered a crushing loss in the Gold Medal Game to Russia. We looked forward to this year's club and whether he might be there or in Florida with the Panthers. He recently attended prospect camp and hopes to be looking for an apartment in South Florida this fall. Howden also remembered the Crushed Can and told us what the new rink will look like. Guy gives him a 50-50 chance of sticking with the Panthers, I say there's only a 30 per cent chance he'll be back in the Jaw.