The Summer of the CHL

It's been a banner off season for the Canadian Hockey League, and one of disappointment for their NCAA cousin. College hockey has seen teams jump from conference to conference and players leave schools or back out of commitments left right and center and join junior hockey north of the border. 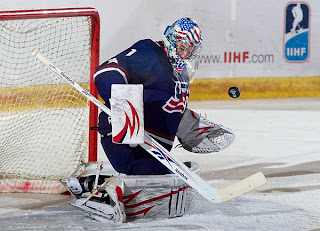 In the last 2 weeks JT Miller (UND-Plymouth), Jamie Oleksiak (Northeastern-Saginaw), Connor Murphy (Miami-Sarnia) and John Gibson (Michigan-Kitchener). One good piece of news is that Tyler Biggs told our show Tuesday night he is committed to playing with the Redhawks in Miami of Ohio.

This trend will continue until the NCAA relaxes it's rules and allows players who have skated in the CHL or signed contracts play south of the border. If that was allowed then I'm sure you would see many players suit up for a year or 2 then decide that college hockey was for them, just like Jamie Oleksiak decided after just one year at Northeastern.

But let's be realistic. The NCAA cares about Football, Basketball and Baseball. It gives a courtesy nod to hockey as it passes in the hallways, but then likely has to ask what that was.

Recently we had Kitchener Head Coach and G.M. Steve Spott on the show and he told us the Rangers were hopeful that Gibson would show up, and Guy and I both quietly thought he would...as he has done.

A WHL executive sent me this text last night.

"Only 2 kids from out west in top 60 drafted that didn't play in WHL but could have. Grimaldi and Lucia."

The stat does say quite a bit. It's actually 3 as Matt Nieto from California was drafted by San Jose 47th overall. He played at Boston University and was listed by the Tri City Americans.

We'll take Grimaldi out here in Portland anytime he wants. You can't win a memorial cup in college, but the Winterhawks have a good shot at this one!

NCAA only cares about Football and Basketball...Baseball is also a second tier sport like Hockey.