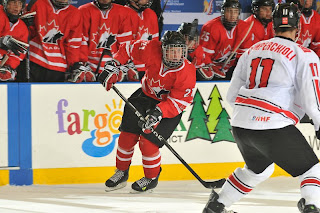 Yesterday's 3-2 red/white game is in the books with the second match set for tonight. In preparation for the second go around, Hockey Canada has re-jigged the line combinations which has several teammates, past and present, finding themselves in familiar company.


TSN is reporting that the lines for the red/white game tonight will be:

The top line features OHL teammates - all three play for the Windsor Spitfires. Brandon Kozun played with Hall and Henrique last night but moves out so that Nemisz can slip into his comfort zone.

Interesting that Bourque stays with the Brandon Boys... I personally would like to see speedy Brandon McMillan on the left side there instead of with Eberle and Kadri. I'd also be intrigued by a Bourque/Cormier/Della Rovere trio.

Evetually, if Cornet is not going to play on the left wing of Eberle's line, the player I would like to see there is Swift Current's Cody Eakin. Eakin (top photo) has been a goal scoring machine this year in the WHL (26 goals) and would fit well with an exceptional set up man like Eberle. And further to that... if Kadri doesn't pick up his play, how about Tyler Seguin getting a look there?

I know that goes against the Red/White rosters but after the first round of cuts tomorrow, it might be interesting for the game against the Huskies/Cougars CIS team.
Posted by Guy Flaming @ 12:38 PM