King Sized Deal, and more to come from Edmonton

Edmonton and Brandon hooked up for a King sized deal today as Brandon loads up for the Memorial Cup, while Edmonton officially arrived in next year land. 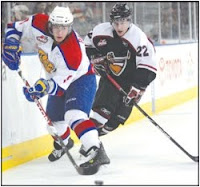 The Wheat Kings get some depth down the middle with 19 year old Brent Raedeke who has 17 goals and 31 points in 39 games this season with Edmonton. They give up 16 year old potential power forward Klarc Wilson who was the 10th overall pick in the 2008 bantam draft. Edmonton will get a 3rd round pick as well if Raedeke returns to the WHL next season, but the prevailing thought is that the Detroit Red Wings will send him to Grand Rapids of the AHL.

"It's tough to see him go, he's been a great player for us for 2 and a half years, a big part of last year's run" Edmonton G.M. Bob Green told Global Sports this afternoon. "Great opportunity for him to play in the Memorial Cup in Brandon, and getting a 16 year old with size and strength and good skills it just made sense to do it."

Green has a history with Klarc Wilson, as the G.M. coached him in spring camp a few years back. As for Wilson it's a bitter sweet deal, as he gives up an opportunity to play in this year's Memorial Cup, but now has a chance to try and lead Edmonton to the CHL title in a few years.

"I think it's a good move for me especially coming from a really strong team where you don't get much of an opportunity, so I'll have a lot more of a chance here so I'm excited."

There were rumours earlier this year that Raedeke was headed to Regina. The Pats did enquire about the forward, but went in a different direction a few weeks back picking up Carter Ashton from the Lethbridge Hurricanes.

Another one making the rounds was that Brandon was looking at another Oil King Adrian Van de Mosselaer, but the rear guard will be to valuable to Edmonton as a 20 year old. 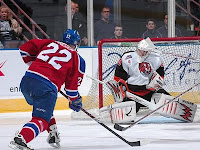 One Oil King that will very likely be dealt after the World Junior Championship is Czech forward Tomas Vincour. Saskatoon has a European spot available, but I also heard today from a WHL player that Vancouver might be moving Milan Kytnar to make room for Vincour. That would also allow the Giants to pick up another 20 year old, possibly Brett Breitkruez from the Oil Kings.
Posted by Dean Millard @ 5:43 PM

Looks like a long "done" season ahead for fans. After two and a half years of "no" progress and pretty much going with only 3 dmen capable of playing at this level ( sorry but Keegan is not at this level yet) every year since the start its time to give up the season tickets. This team cannot compete if the current management remains at the helm.

Any ideas on where Vincour will end up? I have a feeling that Kisio will be looking to add a top 6 forward on the Hitmen but I also believe Kisio is going to land Sbisa which would take Vincour out of the running as Sbisa would take up the 2nd Euro spot on Calgary. I read something about Vincour possibly to the Blades.

Yes, I think Saskatoon is the place that Vincour will end up.