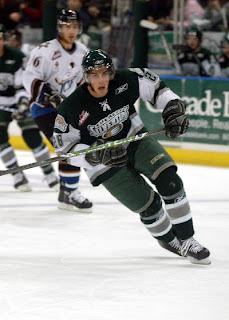 Here is the official release from the Oil Kings and the Silvertips.

The Oil Kings are 11th in the 12-team Eastern Conference of the WHL and are expected to begin dismantling their team by trading away veteran assets like Brent Raedeke, Tomas Vincour, Torrie Jung and Brett Breitkreuz. The addition of Abney is a good one for the team as he'll bring a much needed physical presence currently performed largely by 20-year-old Drew Nichol.

Abney told The Pipeline Show in the summer that he was hoping to play a bigger role with the 'Tips this year under new head coach Craig Hartsburg. The 6'4, 195 lb winger has managed to contribute 6 points in 34 games this year and has 60 PIM to go with them. He was a 3rd round pick (82nd overall) by Edmonton at the 2009 NHL Draft.

Cumiskey leaves the team with one goal and 12 points after appearing in 24 games with Edmonton.

The Oil Kings next game is Tuesday night when they host the last place Lethbridge Hurricanes at Rexall Place.
Posted by Guy Flaming @ 12:49 PM