Team USA has made some cuts after their 4-2 win over the University of North Dakota on Saturday night. The 30-man tryout roster now stands at 24 players with some notable names having been dropped by USA Hockey this morning.


The 6 players released from camp are: 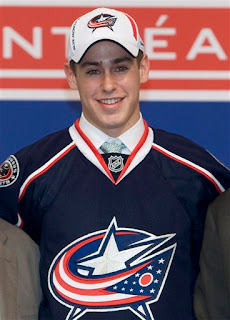 Certainly the name that stands out amongst that group is that of John Moore, the extremely gifted skater who was taken in the first round last June by the Columbus Blue Jackets. Moore has been playing on the blueline this season for the Kitchener Rangers in the OHL and has 20 points in 30 games.

The Americans have two more cuts to make, one forward and one defender, which will be made after thier exhibition game against the Czech Republic in Moose Jaw's Crushed Can on Tuesday night.
Posted by Guy Flaming @ 12:35 PM