Memories of a WJC Hero 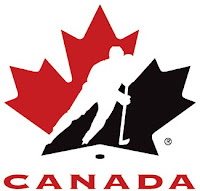 The winner of the 2010 World Junior Championship will be decided on January 5th in Saskatoon but it will be hard to match the drama that unfolded the last time 'Toon Town' hosted the event. Back in the days when it was only a round robin tournament, Canada won their first gold medal on home soil thanks to a late third period goal from a most unlikely source.

Recently, The Pipeline Show spoke with the hero of the 1991 World Junior Championship.


John Slaney was born in Newfoundland, was a 1st round draft pick (9th overall) by the Washington Capitals in 1990 and went on to play 19 years of professional hockey - including this season as he skates for the Frankfurt Lions in the German Elite League.

Dean Millard recently caught up with Slaney for a look back on that moment in 1991 that is etched in WJC fame.

"What I remember is that we had to win the game, a tie wouldn't have [been enough] so we knew that it was important for us to put pressure on the Russians at the time. Greg Johnson won the faceoff, I came back and it was just one of those things where you have to shoot the puck towards to the net. When the puck came back to me I looked up and there was a straight shot right to the goalie but if I remember correctly, their defenceman skated in front of him and I just saw the puck go between the goalie's legs. I remember [Pavel] Bure behind me and if I didn't stop the puck it would have been a 2-on-1 the other way."

Slaney says even though it's been almost 20 years, it's a moment in time that is never really forgotten for long.

"I always remember it, there's no question about that but it's just that every year I've been doing interviews and still today, right now I'm getting goose bumps. When I go home to Newfoundland people talk about it."

Dean asked Slaney to talk about that talented Russian squad, still consisting largely of unknown stars in the making like Bure and tournament all-star Dmitri Yuskevich.

"We knew they were a talented team because that's the way the Russians always were. With [head coach] Dick Todd, we had to hit'em and check'em as much as we could but when we had the opportunity to go on the offence from their mistakes that's when we had to capitalize and do the right things." 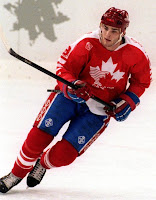 1991 was the second time around for Eric Lindros who, despite enormous hype, ended the event with 17 points, tops on the Canadian team.

"Eric was a man playing against boys really. When you think about his size, he was a big kid back then and he could power over anybody. He could skate well, was big, could shoot the puck really hard... he was just an all around athlete. When you get a body in front of the net like that you don't see too many people moving him."

Slaney went on to list several other players from the '91 gold medal winning squad that he recalls being integral parts to their success.

History has shown that a lot of the top junior players from the WJC actually fail to move on to star NHL careers. It is somewhat surprising to look at the 1991 team and see one example of the complete opposite - a defenceman who didn't register a single point that has since become one of the best blueliners in the NHL over the past two decades and will eventually end his career in the Hall of Fame... Scott Niedermayer.

"He was really our 7th defenceman, he was really just learning if you can say that. Even when he was on the ice he still didn't look like he really knew what he was doing. It's funny how you can look back 20 years and see how things turn out. His ability to skate and shoot the puck, his offensive skills, you're only going to get better with more ice time that you get and he did that in New Jersey for so many years."

It's been more than 15 years since Peter Forsberg's record scoring performance of 31 points in a single WJC. The last notable record to have been established came in 2006 with Justin Pogge's 3 shutouts. Slaney was asked if he felt the difference was in the upgraded caliber of the rest of the world or whether it's due to the focus on improved defensive play.

"I think it's a lot more defensive. I can see that from over here [Germany]; back in the day teams would be winning 8-2 or 8-7 but games today there aren't as many goals. I think the big thing is the goaltending and the equipment they are wearing today is so much bigger. The goalies themselves are bigger to - you look at Andy Moog and compare him to the goalies of today." 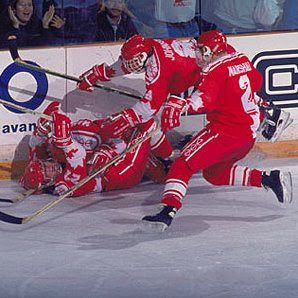 Slaney ended the conversation by describing the celebration after this monumental goal went in (see left).

"I remember that I had sprained my ankle about a month and a half before [the WJC] and when we scored, Kent Manderville just absolutely hammered me, I remember that plain as day - it was the hardest hit I had in the tournament!"

You can hear that entire conversation between Dean Millard and John Slaney by clicking HERE.

This Tuesday on The Pipeline Show we are presenting our own 2-hour World Junior Preview Show as we'll go through each of the contending teams and decide who the favorites should be.
Posted by Guy Flaming @ 1:00 AM