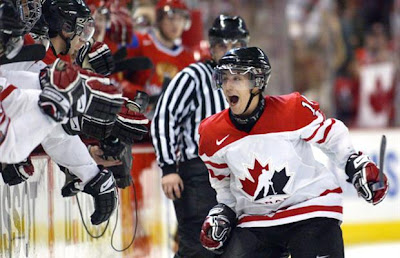 As The Pipeline Show has speculated about for months now, Edmonton prospects Jordan Eberle and Philippe Cornet are starting Team Canada camp on the same line.

As Dean mentioned last week, Eberle had told head coach Willie Desjardins about the past chemistry the two wingers have developed over the last few years and obviously he's listening to his star player.

I directly asked Hockey Canada head scout Al Murray if Oiler fans might see Cornet and Eberle together at least a little bit during camp but on Tuesday, he was keeping that to himself. He did hint though that "We'll do whatever Oilers fans want" but it wasn't clear at the time whether that would mean sharing the same line or not.

Cornet sits with 49 points in 35 games with Rouyn-Noranda and Eberle has 29 goals and 60 points in just 28 games. 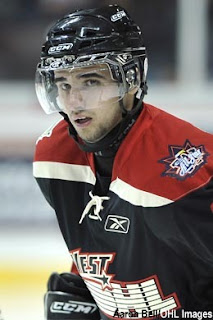 After The Pipeline Show last week, I stuck around with Corey Graham and Will Frazier for the first hour of Edmonton Sports Night Live. At one point I was asked who I thought should be given a crack at the center spot next to Eberle now that Cody Hodgson has been scratched. The name I came up with: Nazem Kadri (TOR).

Not that I'm trying to toot my own horn or anything but Kadri is in fact the player that will center Cornet and Eberle... for now. Kadri had a sluggish start to the OHL season after garnering a lot of attention at Maple Leafs camp. The 19-year-old now has 38 points after 28 contests. 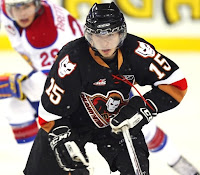 TSN ran a brief snippet of other line combination which includes Windsor Spitfires teammates Taylor Hall (2010) and Adam Henrique (NJ) being joined by WHL leading scorer Brandon Kozun (LA). Kozun leads the entire CHL in scoring at the moment with an impressive 62 points in 33 games for the Calgary Hitmen.

Scott Glennie (DAL) and Brayden Schenn (LA) will look to continue with their Brandon Wheat Kings chemistry while spark plug QMJHL Gabriel Bourque be joining them.

It's interesting to note that Eberle and Cornet are the 2nd and 3rd leading scorers in the WHL and QMJHL respectively but that the trio of Hall, Henrique and Kozun features the WHL's top scorer and the top 2 from the OHL.

All that considered, which line should be considered the #1 unit?

Line combinations according to Hockey Canada:

I'd personally like to see a banger and defensively responsible player like Brayden Schenn centering Eberle rather than another skill-only player in Kadri. I don't think Glennie's been good enough this season to make the team and might actually hurt Schenn's chances of making the team if he has to continue to hold both of them above water.

My ideal forward combinations this year are shaping up as:

Line 1 has the ability to match against the opposing stars and still score. Line 2 features power and skill. Line 3 hits anything that moves. Line 4 hammers the soft-minutes. Eakin steps up into an offensive role if someone falters and Adam is just too versatile to pass up.

you only get 13 forwards though... unless you're only taking 6 d-men.

Yeah. I remembered that this morning.

No way I take only 6 defensemen, lose Adam from my list.