While Canada has wrapped up their WJC camp and named it's 22-man roster, the American squad is opening their first ever 3-day December camp today in Grand Forks, North Dakota.

The 30-man camp features a plethora of talented players including 22 NHL drafted players and 5 others who will be eligible for that distinction for the first time in June of 2010.

But will they be good enough to challenge for a medal let alone contend for the gold?


Jim Johannson, the Assistant Exectutive Director of Hockey Operations for USA Hockey, was a guest on The Pipeline Show recently and we asked him to talk about the American entry into the 2010 WJC. Our conversation began with the new tactic of holding a December camp, a strategy borrowed from the Hockey Canada playbook.

According to Johannson, geography played a part in USA Hockey's ability to hold the camp.

"Saskatoon and Regina allowed us a little more time, not having to worry about travel, if we were to have a pre-camp and then try and travel to Europe. We do face a bit more of a challenge than Canada in terms of college exams and schedules that a pretty significant core of our players have that relate to that." We started our player discussions off by talking about Kyle Palmieri, a former U18 player who was asked to leave the program for breaking team rules. Unlike Hockey Canada who has black balled Kyle Beach for an incident that occurred three or four years ago, USA Hockey has invited Palmieri back to tryout for the U20 squad.

"We had a little bit of a problem with Kyle, like we have had with a few players in the past, and we didn't think the privilege of playing [with the US-NTDP] was still entitled to him at that point. He stayed in Ann Arbour, finished school and did everything that he needed to do academically to put himself at Notre Dame this year... He dealt with it with us in a pretty mature way and it would have been easy for a guy to pack up and find a different place to play but Kyle stuck it out and did some things to become a better prepared player, better focused player. We have high expectations of him coming into the camp in Grand Forks." 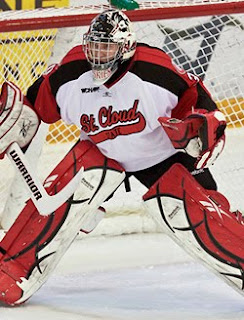 The roster was initially 29-players deep but Kenny Ryan was a late addition to bring the total up to 30. Only two netminders though which means that St. Cloud starter Mike Lee and US-NTDP keeper Jack Campbell know they are on the team and it's just a matter of who starts. Most expect that to be Mike Lee, two years older than Campbell, but Johannson says he expects the two to battle for the spot.

There are 11 CHL based players invited to the camp. We asked Johannson if he felt that in the past there was a bias against Americans who didn't follow the NCAA route.

"I think it's fair to say that in the past we didn't have as good of a grasp on some of the guys playing up there We never go into it with a bias based on where a guy is playing but I will agree that we didn't know the players as well but we're working on that and we're doing a much better job of that. [scout] Tim Taylor is a huge assistance for me in capturing those guys. There are just so many options now for kids now at younger ages that we do have players spread out now across the country both in the CHL and college hockey. In the end I think it's just that we're doing a better job of evaluating our players and getting a chance to go out and see them. The CHL is obviously a part of it because there are a lot of top players that have played well in our past programs or camps that for whatever reason end up playing up there, which is fine, and now we're just doing a better job of getting them to the teams and the camps that they deserve to be at." 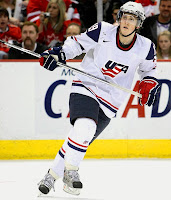 Jordan Schroeder is one of just three returnees to the team and, despite a poor year at Minnesota, will be counted on to be a leader statistically and in the room.

"Jordan has performed quite well for us in past tournaments. As an underaged player he was arguably our best forwards. Last year I know he got off to a great start in the tournament and he was disappointed in his play at the end so i think he comes into it now saying that he's got a bit to prove. From a leadership perspective, being a three year guy I know he hopes to bring some of that with it. Our challenge is to not make that a burden for him but to let that experience be something that shines through." 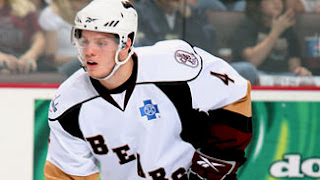 Defenceman John Carlson should be a key part of the U.S. blueline group. After not getting the invite last year, it's a good story to see how he's been freed up by the Washington Capitals/Hershey Bears to partake in the tournament. Much like Alex Pietrangelo for Canada, Carlson should provide a ton of leadership coming from the ranks of professional hockey.

"We're excited with John and happy with George McPhee and the Washington Capitals for making him available. It's a chance for him to come in and play with guys his own age, be a leader. we certainly have high expectations for John and are excited to have him be part of our team."

Of the 14 NCAA skaters at the camp, the guy with the most points so far this year Wisconsin forward Derek Stepan with 22 points. The next highest scorer is Danny Kristo from North Dakota, one of the other returning players to the team.

Jeremy Morin of the Kitchener Rangers leads the way for the CHL component, he has 44 points in 32 games. There are 7 CHL forwards trying out representing all 3 Major Junior leagues. The three CHL defencemen all come from the OHL.

The Americans will practice for three days and end their camp with a game Saturday against the Fighting Sioux, the #6 ranked team in the NCAA. A reduced roster will play another exhibition, this time against the Czech Repubic, on Tuesday night at the infamous "Crushed Can" in Moose Jaw, home of the WHL Warriors. The final roster is expected to be unveiled on December 23rd, three days before the tournament begins.
Posted by Guy Flaming @ 10:14 AM

I wonder what they players will think of the Crushed Can. It's fun to watch a game.

Is there anywhere this camp can be followed?