Make no mistake, the gold medal performance from Team USA last year was anything but a fluke and despite a historically disappointing record, there is every reason to believe the Americans can win it all again in Buffalo. This morning USA Hockey announced their 29-man camp roster which will compete for 22 spots on the tournament team and with experience, depth and home ice advantage, USA has to be considered the favourites to win gold in 2011.


With 8 returning players from the successful 2010 team, USA is much more experienced than their Canadian counterparts who'll dress just 3 returnees. USA's camp, the second time they've held a December session, starts on December 16th and the final team is expected to be revealed on the 22nd after exhibition games against R.P.I. (ECAC), the Czech Republic and Norway.

Here is a link to the 29-player camp roster. You can also watch video of the formal ceremony. I did, largely out of curiosity to see if USA Hockey GM Jim Johannson would be selective when mentioning where players were currently located. That was again an issue with Hockey Canada who chose to omit the club team for the 4 NCAA based players which made the organization look rather petty in my opinion. For the record, USA Hockey mentioned the teams and leagues that the 5 CHLers are coming from. 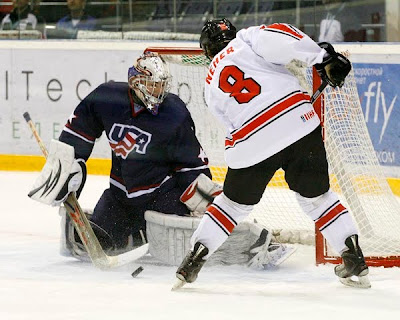 It's interesting that USA is only inviting two goaltenders - clearly the position is set with Jack Campbell (Windsor) as the starter and Andy Iles (Cornell) the support from the bench. Considering Campbell has been only good, not great, this year in his OHL debut one wonders if this is USA Hockey's way of taking pressure off of him and basically saying "You're our guy, relax and get ready for Buffalo". That's Dean Millard's working theory and it makes sense to me too.

There are 10 blueliners invited and I think you can get down to 7 really solid choices quite easily. There might be a roster surprise, as Jamie Oleksiak's camp invite was, but I think you can write in John Ramage (CGY), Brian Dumoulin (CAR), Derek Forbort (LA), Nick Leddy (CHI) and Justin Faulk (CAR) leaving a couple of spots up for grabs. Ramage, of the Wisconsin Badgers, is the only returnee but the rest of the crop here is mostly big, mobile and experienced internationally with the US-NTDP. 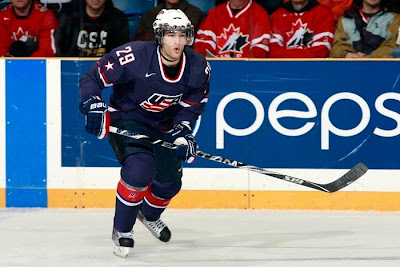 Unlike Canada, USA has a number of returning forwards. Speed was the biggest asset for this group last year and now you add experience to them as well as another year of maturity under their belt and you've got a deadly mix of players.

Jeremy Morin (CHI), Jerry D'Amigo (TOR) and Kyle Palmieri (ANH) rejoin the club from the American Hockey League and only the Leafs prospect hasn't played in the NHL this year. Ryan Bourque (NYR) and Chris Kreider (NYR) are joined by Jason Zucker (MIN) as other 2010 gold medal winners. 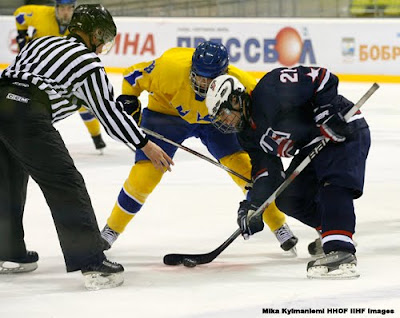 Other CHL invites include Mitch Callahan (DET) from the Kelowna Rockets, Medicine Hat's Emerson Etem (ANH) and Brandon Saad (2011) of the Saginaw Spirit.

Denver Pioneers freshman Beau Bennett was hurt last weekend and is expected to miss up to a month of action - he was potentially in the mix for an invite but will be unable to participate.

The Conspiracy theorist my eye Tinordi and Pitlick's absence and suggest that their balking of the NCAA for the CHL probably played a role. I would counter that by pointing to USA's current depth up front as reason why Pitlick and his 25 WHL points (outside the top 50 in WHL scoring) wasn't enough and a reportedly disappointing season thus far in London as the culprit for Tinordi.

For me, this team has to be considered the favorite to win gold. You tell me if you agree or not and if not... who should be?
Posted by Guy Flaming @ 11:27 AM