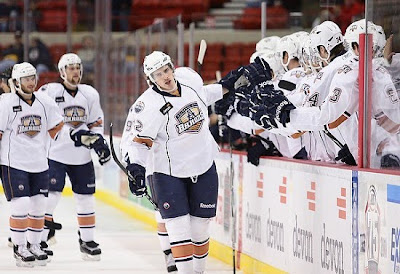 A couple of Oilers prospects have returned to action and have contributed immediately since getting back on their blades. Ryan O'Marra missed 4 games recently with a shoulder injury but was back in the lineup for Oklahoma City as they played a 2-game set in Manitoba. Jérémie Blain lost much more time with a cracked foot but he's back for Acadie-Bathurst and has picked up two points in as many games.


Would O'Marra's absence have an impact on linemate Linus Omark? That was a question posed by Allan Mitchell (Lowetide) and it was a good one. A quick look at the stats sheet shows that Omark was held off the scoresheet in 3 of the 4 games and scored two goals in the other. With O'Marra back in the line up, the Swede had a 3-point night against the Manitoba Moose. Coincidence? That's an open question, feel free to leave your thoughts behind in our comments section.

As for Blain, his return to the lineup for the Titans couldn't come at a better time. Acadie-Bathurst has been blow out twice by Saint John and are trying to gain ground on Moncton in the ridiculously tough Maritimes Division. The Wildcats lead was two points but the Titan pulled even on Sunday with a 8-2 win over Gatineau and still have a game in hand. Blain had an assist in the game and held a +3 rating, he also had a helper during Friday's 8-0 blasting of the PEI Rocket.

In all, Blain missed 27 games with the injury. The Oilers 4th round pick last June had 38 points last year and is expected to be a key component to the back end for Acadie-Bathurst this year.
Posted by Guy Flaming @ 3:04 PM