Saturday morning we got things going with The Pipeline Show Game Day, and had lots to discuss. We recapped the night in the CHL and NCAA and took a look at key match ups Saturday night. Who should captain Canada at the WJC? Our poll question will revealed what you think. And much more...

Our guest list included Dave Starman of CBS College Hockey and USCHO.COM who teed up the WJC tournament favourites from the United States. A title defence never looked so attainable for the Stars and Stripes, and Dave let us know who will lead this year's team.

We continued our look at the World Junior Tournament as Hockey Canada head scout Kevin Prendergast came on board courtesy the Saturday Morning Samuel Adams Hotline. Prendergast just put together the so called 'lunch pail' team for the Canucks. Who's lining up with who and will an OHL or QMJHL goalie start on boxing day? we asked those questions and more. 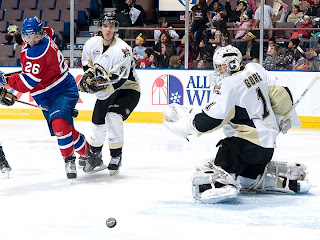 Recently we caught up with some WHL skaters who are gearing up for big events. Mitch Callahan is on the ice at U.S.A camp, the Kelowna Rocket rolled through Edmonton recently with his point per game numbers. Marek Hrbas just left the Oil Kings to join the Czech Republic, and Mitch Topping (above) helped Chilliwack beat the OK Kids Friday night 1-0. Topping and Hrbas made up our look into the 2011 draft.

Wrapping up the show was our NHL Insider Daren Millard from Rogers Sportsnet. Lot's was discussed including a good dilemma the Oilers could be faced with, who is the most important player in the Leafs trade to acquire Dion Phaneuf last January. Plus what are our favourite World Junior memories?

We also set up our 2-hour World Junior Preview show that comes your way this Tuesday December 21st.

If you missed it live, click the archive!
Posted by Dean Millard @ 1:09 PM