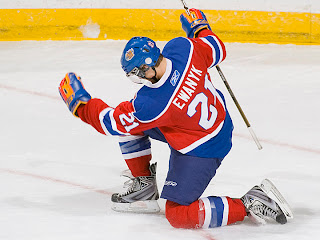 Continuing his guest blogging series with us today is Travis Ewanyk, forward of the Edmonton Oil Kings. The product of St.Albert, AB wrote the first entry to the blog back on October 27th which you can read HERE. Since then, the Oil Kings have played through a lengthy losing streak, made a major trade, grown facial hair for charity and gotten hot.

Here are the last several weeks from the player's perspective courtesy Travis Ewanyk... 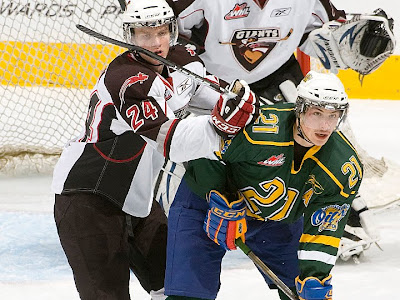 With November wrapping up, it's safe to say I won't miss my "muzzy" that I attempted to grow in support of "Movember," a tradition done by hockey teams across the country in support of cancer. Around the dressing room there was a fair share of players in my situation that needed a team supply of just for men, but there was a few guys who carried us along. Legs (Stephane Legault) and Decher (Ryan Dech) really impressed me, and I have to say I was a little bit jealous. The whole month turned into a muzzy growing competition and guys took it pretty seriously. Even our trainers, Cheese (Brian Cheeseman) And Rogs (Rogan Dean) joined in, and as much I hate to admit it I say they won this year.. Some players even decided to keep theirs into December, which is unofficially called Dusty December, followed by Beauty January. You can bet I will not take be taking part in these and until next year my muzzy growing season has ended.

Aside from all the hairy upper lips, since my last time speaking to you my team has been on a Roller Coaster ride of a season. We embarked on a 12 day road trip, which included a dip into the states to play Spokane, and a trip around BC. A fairly long losing streak haunted most of the early part of our season, but after breaking the streak we started to play a lot better hockey.

During that time we acquired a new goalie, Jon Groenheyde, exchange for our own goalie Cam Lanigan. Coming from Kamloops where he wasn't quite getting the opportunity to play he started off strong for us, and has since continued his solid play. Cam was a great guy and will be missed by the boys, but when Jon arrived and helped us get some big wins getting out of our slump I think our season turned around. Now only 2 games under 500, and having earned 9 out of our last 10 points were riding momentum and around the room every guy is playing good hockey. I look forward to the few games left before the Christmas break as a great opportunity to position ourselves in a spot where after we return we can be a serious playoff contender and battle to continue moving up the ranks. 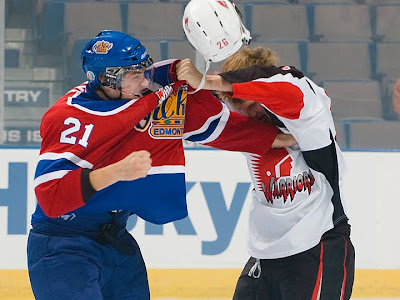 On a personal level I have been trying to stay consistent with my play, and continue with the work ethic that has always driven my play. I have been playing a lot more at center, which is what I see as my natural position, and I've embraced the opportunity. I've been continuing with my physical play, and I never mind letting the gloves fall off. I've chipped in offensively in the past few games, and I hope to continue being able to produce offensively for my team and add that dimension to my game.

As Christmas Break draw's near, so do the National Tournaments at the Junior Level. Headlined by the World Juniors, my fellow Oil King teammate Mark Pysyk, (fresh off playing in the Super Series vs. Russia), was invited to the last camp before the final roster is made. In my eyes he would be a great acquisition for Team Canada. 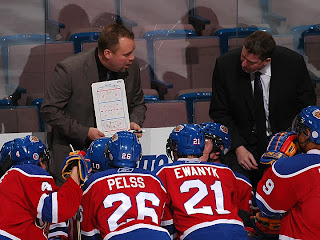 Kristians Pelss was selected to represent Latvia in the world U-20 Championship, and he is very capable of having a great tournament and will be depended on to be on of the stronger players for his team.

Griffin Reinhart was also selected to represent Team Pacific at the u-17 Championship. Griff, or "Big Cat", as some of the guys call him, will be a standout on defense, and I wish him, Mark and Kristians the best of luck.

In the midst of our teams resurgence, I am excited for the last part of December and along with the guys are eager to start getting into those crucial games after Christmas when the playoff battle heats up. I'm confident our team has the guys in the room to be very solid team down the stretch and each guy is buying into the big picture and the results are starting to show. Until next time have a great holidays, and I appreciate you taking the time to read about myself and the Edmonton Oil Kings.

Travis Ewanyk currently has 7 goals and 12 points through 28 games with the Oil Kings this year. He also leads the team with 61 PIMs including 5 fighting majors (and no losses). He was chosen early in the 3rd round (48th overall) in the 2008 WHL Bantam Draft by the Edmonton Oil Kings and he dressed in 42 games last season compiling 5 points and 45 PIM. Ewanyk is listed at 6'1 and 185lbs and was ranked 19th by NHL Central Scouting in the WHL Top-25 eligible players for the 2011 NHL Draft.
Posted by Guy Flaming @ 5:32 PM