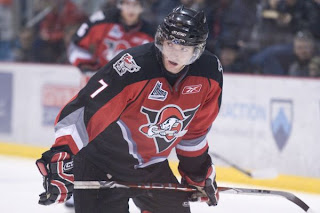 Drummondville center Sean Couturier was a one man wrecking crew before leaving for Canada's World Junior team camp. He racked up 17 points in his last 6 games and had back to back 4 point outings. The surge has vaulted the potential first overall pick to 2nd in Q scoring.

Last year he led the QMJHL in scoring with 96 points, 41 of them goals in 68 games. Even as a rookie he was pretty special and gained some valuable championship experience going to the Memorial Cup. But don't take my word for it, hear it from his first junior coach. I chatted with Guy Boucher after Tampa Bay's game against Edmonton on Friday and we'll bring you that conversation Tuesday night on The Pipeline Show.

Boucher coached Couturier for just one season but saw something special right away, and is certain he'll be an NHL star one day.

If you're in the Edmonton area you can catch the conversation on the TEAM 1260, or you can listen on line and get the whole guest list at www.thepipelineshow.com where the interview will be archived later that evening. As usual show time is from 7-9 pm mst.
Posted by Dean Millard @ 8:26 PM