Tuesday on The Pipeline Show it's our final program of 2010 and we'll wrap up our extensive lead up coverage of the 2011 World Junior Championship with our big 2-hour preview.

We'll get some in depth opinion on Team Russia from Dmitry Chesnokov of Yahoo! Sports and also grab someone from both USA Hockey and Hockey Canada.

If that's not enough, our old friend Peter Loubardias of Rogers Sportsnet will join us and deliver another of his never-miss pre-tourney predictions. A few years ago he told us some kid named Matt Halischuk would probably score a big goal... and all he did was score the overtime winner for Canada in 2008. He also told us that Cody Hodgson would lead Canada in scoring in 2009... and sure enough, he did. What will Peter come up with this year?

Plus Dean and I will make out podium predictions and go over some of the players you should be paying specific attention to with the 2011 NHL Draft in mind. Which country might be the Cinderella this year? And... why or why not should you consider Canada to be the favourite? 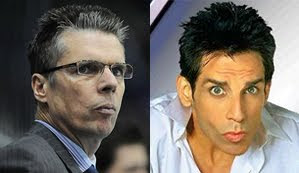 (Seriously though, with a coach that can apparently unleash his own version of Blue Steel to blind the opposition, who would bet against Team Canuck??)
Posted by Guy Flaming @ 11:22 PM