Tuesday Night on TPS: Team USA, A Swede not name Larsson in the top 3, and another Swiss star

We kicked things off Tuesday night by running through the invitation list put out by USA Hockey for their World Junior camp. Both Guy and I were surprised that for a second straight year, the Americans aren't having any competition for who makes the team in net, and we discussed a few guys that didn't make the grade. 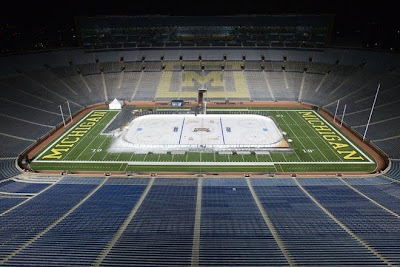 Guy went off on Yale being ranked #1 in NCAA hockey and we revealed Hockey Alberta's team for the upcoming Canada Games with a California kid making the team in net. We had a fairly funny email on the topic as well.

Our first guest was College Hockey inc head man Paul Kelly. He gave us his thoughts on the USA invitation list, as well as the upcoming Big Chill outdoor NCAA game this weekend...it's going to be massive. Paul gave us details on a recent meeting with the NHL and how college players leaving early is a major concern for the collegiate game.

Sven Bartschi of the Portland Winterhawks was our 2011 draft prospect. He seems to be another Swiss that can't miss prospect. Bartschi explained what the culture shock has been like and how Switzerland is starting to become a force on the international scene.

Austin Watson was an American we thought would be called upon by USA Hockey, but the Peterborough Pete didn't make the grade. It's been a tough season for Watson and the Petes, but he was honest about the struggles and didn't shy away from any questions. The Nashville Predator first rounder from 2010 seems like a keeper and heart and soul type of player.

We wrapped up the show with our CHL Insider Sam Cosentino where Sam told us why he thinks Kitchener forward Gabriel Landeskog might crack the top 3 for this years NHL draft. We talked more about the USA list as well as the struggles of the Guelph Storm, trade rumours surrounding Zack Kassian, Ryan Ellis and Jack Campbell. Concerns over the stability with the Lewiston Maniecs, and whether or not Saint John might be getting Yann Sauve back. We also discussed who Hockey Canada has replaced injured Brandon Gormley with and why I think they shouldn't have replaced him with anyone.

If you missed it live... click the archive. Until then we're back Saturday morning 9-11 AM MST.