The 40-player invite list to the 2011 CHL Home Hardware Top Prospects Game will be released on Tuesday. The game is one of the marquee events during the draft year for a prospect trying to elevate and raise his stock in front of a plethora of NHL scouts and executives.

Unfortunately, like every year, some deserving players might be on the outside looking in whether due to injury or simply not getting the invite. 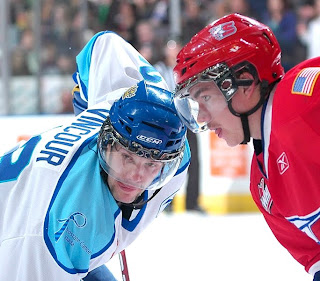 Locally, former Edmonton Oil King Tomas Vincour was on the original list back in 2009 but injury during the World Junior Championship that season kept him out of the event. Vincour had once been considered a potential 1st round pick but limited games that year and missing the Top Prospects Game likely contributed to his falling to Dallas in the 5th round.

Mark Pysyk played last year and ended up going in the 1st round, 23rd overall to the Buffalo Sabres. 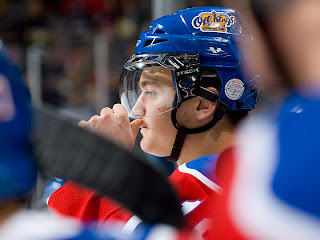 This year the Oil Kings could realistically see two players get interest from the CHL/NHL. Michael St. Croix deserves to be there based on the last two months including his current 11-game, 24-point scoring streak. He was ranked 17th in the WHL by Central Scouting in their prelim list but it's safe to say he'd be much higher than that today. He's now 8th in WHL scoring ahead of big names like Ryan Nugent-Hopkins, Cody Eakin, Quinton Howden, Brett Connolly and Curtis Hamilton - all guys who just tried out for Canada's WJC team.

Yet... we're hearing St. Croix might not be on Tuesday's list. Just a rumour but the team couldn't confirm either way so it remains something to watch for. 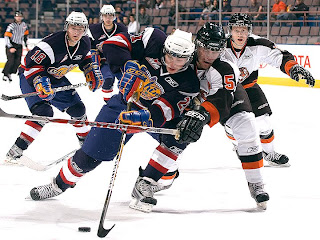 The other player I'm thinking of is Travis Ewanyk but I think he's a longer shot to get the call. Despite what Dean's recent straw poll of a handful of scouts suggested (that NHL teams might consider drafting Ewanyk ahead of St. Croix), I don't think the blood and guts forward is the kind of guy who usually gets invited to the Top prospects Game.

A really long shot might be netminder Laurent Brossoit but considering he was ranked 4th in the WHL I doubt he gets much of a consideration for the game.

The Top Prospect Game is set for January 19th in Toronto.