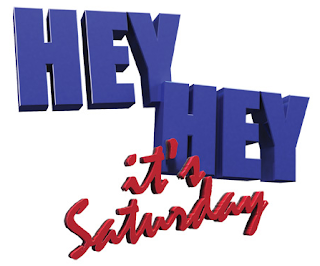 Despite a no-show, Saturday's Game Day edition of TPS was another fun way to start the morning. Not only did we have our weekly session with Daren Millard but we touched base with one of our favorite guys covering the NCAA and also talked with one of the top rated goaltenders available for the 2011 NHL Draft too. 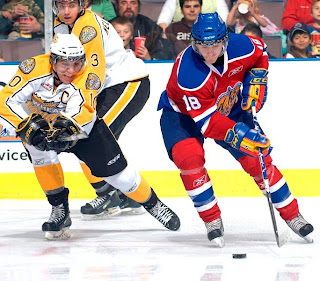 Dean and I began the show talking about Friday night's game between the Edmonton Oil Kings and the Brandon Wheat Kings, a 8-4 slug fest that ended in favor of the home side. Has Michael St. Croix, thanks to an impressive scoring streak, raised his stock enough to garner 1st round consideration? What did scouts tell TPS when asked who they would take today, if forced to choose one of St. Croix and teammate Travis Ewanyk? We gave our thoughts on both topics.

we expected to speak with Quebec Remparts forward Ryan Bourque but he was apparently sequestered by Owner/GM/Head Coach Patrick Roy for an impromptu meeting. While the last minute snub left us short, it gave us the opportunity to discuss some of the events that transpired in the WHL and QMJHL on Friday night. Several high scoring games in the 'Dub including a 9-6 win for Moose Jaw over Regina where Quinton Howden didn't register a point, a 6-0 win for Everett with Landon Ferraro not on the score sheet. In the Pats loss, 2011 blueliner Myles Bell was a -5 and yet Edmonton's 2010 6th round pick Brandon Davidson was somehow a +2.

We got back on track in segment 3 when we brought in Jimmy Connelly, the senior writer with USCHO.com to talk about current events in Hockey East. Boston College and Boston University struck for 14 goals as the Eagles down the Terriers 9-5 plus New Hampshire won, Maine tied and the upstart Merrimack Warriors won again. As always, Jimmy was able to paint the picture in the Conference for us and even tackled a hypothetical "What if Yale was in HE" question too. 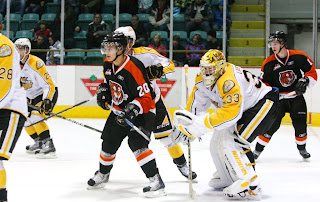 Our spotlight on the 2011 Draft shone on Brandon netminder Liam Liston. Dean and I spoke with the Edmonton product before Friday's loss (a good thing considering how it ended) and also chatted with assistant coach Dwayne Gylywoychuk who described the progression and development he has seen in their young starter.

Finally, Daren Millard returned to the program and we talked about the impending visit by Tyler Seguin and the Boston Bruins. we got his take on the lasting legacy of the Phil Kessel trade, how safe Ron Wilson is and what the "Thank You Phil" chant in Boston might sound like in Toronto.

We also asked Daren who he felt was the top freshman blueliner in the NHL right now - John Carlson, P.K. Subban, Cam Fowler or Kevin Shattenkirk. Also, with Brayden Schenn having been re-assigned to the WHL... how much pull does a NHL team have on what the junior team elects to do with the player once he's back? Can a NHL team ever enforce their will, possibly to facilitate a trade from one team to a contender?

A lot of ground covered on Saturday and if you missed it live... you can click the archive RIGHT HERE.
Posted by Dean Millard @ 1:29 PM