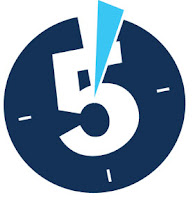 Team U.S.A unveiled the 29 players they are inviting to their training camp as the defending champs look to win 2 titles in a row for the first time. Here now are 5 story lines heading into camp and the eventual tournament.

5. Inviting only 29 players means the coaching staff already has a pretty good idea who will be on this team and who won't. Canada has 41 players coming to it's camp. With 22 spots available, only 7 will leave the Stars and Stripes camp unhappy. It's to simple to assume the young players that are not drafted yet will be 4 of the 7 but a guy like Rocco Grimaldi is having a very good season with the US-NDTP and Jamie Oleksiak brings his 6 foot 7 inch and 240 pound frame to the blueline from Northeastern. The biggest surprise is that USA Hockey will have zero competition in net, with incumbent Jack Campbell from Windsor and Andy Iles of Cornell. While it might be to take pressure off, it could lead to complacency between the two, as most expect Campbell to be the starter.

4. There are a number of guys from the CHL that weren't chosen, one of them being Mac Carruth of the Portland Winterhawks. The Chicago draft pick is in his second season with Portland after deciding against a scholarship with Minnesota State. I don't see the harm in inviting an extra goalie to at least create some competition. Carruth isn't the only player who jumped from the NCAA to the CHL to not get invited, as Tyler Pitlick (#7 below, photo: Medicine Hat Tigers) who also left Duluth to join Medicine Hat, and Jarred Tinordi - now playing in London after saying no thank you to Notre Dame - were also on the outside looking in. I don't believe for a second that USA Hockey would hold a grudge because players left NCAA scholarships for the CHL, as Jack Campell and Cam Fowler (last year) wouldn't have been wearing American colours. As Guy pointed out in an earlier post, the OHL's leading scorer, Shane Prince, also didn't get an invite. Is he the 3rd wheel on a really good line, or just to young? One of our guests for this evening's show, Austin Watson of Peterborough wasn't one of lucky 29, and we'll find out if he thinks playing in the CHL played a role in not getting the call. 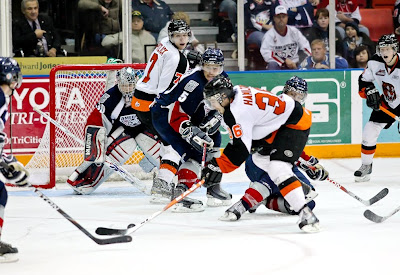 3. For the 2nd time in tournament history, Team USA is the defending champs. Does that hurt or help? How about playing at home? Or will there even be a home ice advantage? When the tournament was held in North Dakota in 2005, thousands of Canadians flooded across the border to give Canada a boost. That was also the last time the Americans were the defending champions and they finished out of the medals. There is a lot of pressure that comes with playing at home, just ask anyone who's suited up for Canada?

2. This could end up being the best American team ever, what with 8 returnees. 6 of them are up front, meaning half of the Americans 4 lines have championship experience from last year. The squad will also feature 4 players who have been suiting up in the AHL this year. It's obvious that they are the pre-tournament favourites, but can that breed over confidence? It happened to Canada in 1998, where after winning 5 straight titles, a team with Vincent Lecavalier and Roberto Luongo finished 8th. Or 1992 when the Eric Lindros led team that also featured Scott Niedermayer (0 points in WJC Career) came in 6th place 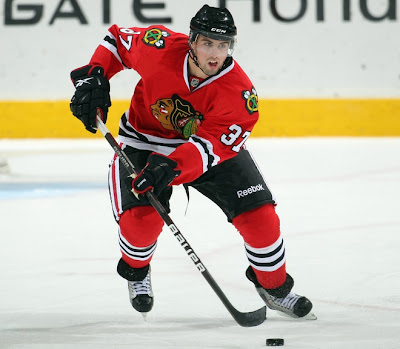 1. I can't wait to see this blueline perform at the tournament. First of all you have the man who many believe will be on an NHL bench soon Mark Osiecki on the staff as well as USA Hall of Famer Phil Housley. Osiecki was masterful at turning out terrific blueliners at Wisconsin before taking the head coaching job with Ohio State. Housley was one of the best offensive dman of his time in the NHL. And While there is only one returning Dman on the team, with the mentoring of these two, the U.S.A might have the strongest back bone of any team. 6 of the ten invited to camp are atleast 6.02 with 3 checking in at 6.04 or bigger. There are 3 guys who are 5'11 but Nick Leddy (left), Adam Clendenning and Justin Faulk can all move the puck with efficiency. This blueline should make whoever plays goal feel much more comfortable.
Posted by Dean Millard @ 5:30 PM

Even last season they went with only 2 goalies. If anything, they making a trend.