TPS has received a sneak peak at what Team Alberta will look like when it's Canada Games squad is unveiled tomorrow afternoon in Edmonton. The news conference will be held at Rexall place following the OIlers practice and on hand will be Devan Dubnyk and Jordan Eberle. Here's a look at the team: 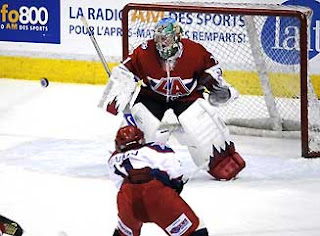 The first name that jumps out is Eric Comrie (above), who as far as I could find out hasn't played very much, if any, minor hockey in Alberta. He currently plays in California and is a draft pick of the Tri City Americans. We reached out to our scouting friends to find out if this is generating much talk, and apparently it is. We were told there are two goaltenders in Alberta who could/should have made the team in place of Comrie. It will be interesting to hear what Hockey Alberta has to say about their choice tomorrow at the newser. Here are some names who didn't make the cut, but are players you will likely hear about in the future.

In reviewing the Canada Games Council eligibilty criteria posted on their website this writer is curious as to what piece of the criteria Eric Comrie meets? Can someone enlighten me? I would appreciate it - thanks.

Since when does money and a last name decide who makes the team. Congratulations to all the deserving players that did make the team. But at the same time, i feel bad for the players that had their spot wrongfully filled. Comrie doesnt even meet the requirements to be on the team. When and if he plays in whatever city he lives in he is still not at the same level as Wyatt or Coleman. I personally know one of the two that were not picked and I know how hard he works for what he has been given...nothing has ever been handed to him, everything he has, he has worked for and taken. Maybe one day Comrie will realize that he is gaining a bad reputation from more than just those that know the two goaltenders that werent taken. Shame on Hockey Alberta for falling to the pressure that was most likely put on them by the last name Comrie. However what goes around comes around and it will all be sorted out on the ice. It remains to be seen if Comrie can even perform when under pressure. Wyatt and Coleman have both worked for all the recognition that they have received. They also have both proven themselves in the past. Good luck to Team Alberta, even if they are trying to stretch the rules

I'm with you in saying that Comrie shouldn't be on the team.

But, it's a little silly to say that Comrie 'isn't at the same level' as Hoflin or Vollrath or to question whether he can perform under pressure.

Comrie was a first round pick in the bantam draft, ahead of both Hoflin (2nd round) and Vollrath (3rd round). And the team that picked Comrie gave up a 2nd round pick (a big price) to move up a few spots and get him. And this is a team with a pretty good track record with goalies lately - Carey Price, Chet Pickard. So I think it is very safe to say that he's 'at their level', so to speak.

On ability, these kids are ALL deserving of being there. The only issue IMO is whether Comrie should be there when he doesn't even live in Alberta.

Bill Comrie (his Dad) still owns a home in Edmonton and they as a family spend alot of time in EDM.
Were you guys as upset when Regina SK. born Jordan Eberle played for Team Alberta?

Eberle played for the Calgary Buffaloes of the AMHL...