St. Croix On Fire:Is it enough to push him into the first round? 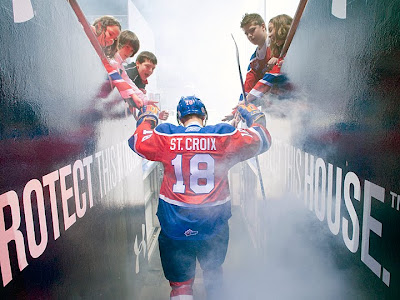 Edmonton sophomore Michael St. Croix has the Midas touch, which is a good thing if you're an Oil King fan. Thanks to a hattrick and one assist in a victory over Calgary Wednesday night, St. Croix now has an incredible 17 points in his last 6 games. Those are Sidney Crosby type numbers. The Winnipeg native has points in 8 straight games, and has amassed 6 straight multi-point efforts including back to back 4 point outings. The hot streak has pushed St. Croix near the WHL scoring leaders as he now has the 9th most points in the league with 18 goals and 20 assists, but is his offensive outburst enough to make him a first round pick?


I've spoken to a number of scouts and even some WHL coaches about the 2011 draft prospect and while all of them have been mighty impressed with the offensive numbers, as well as an improved defensive game and play away from the puck, they were still hesitant to admit St. Croix is a first round pick. 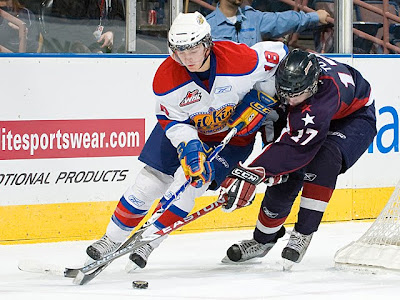 I asked a number of them to choose between St. Croix and his teammate and fellow 2011 prospect Travis Ewanyk and each one said when choosing between the two they would take the more well rounded Ewanyk. The St. Albert product doesn't have St. Croix's flashiness or superior puck skill, but he's a coaches dream as every time you send him over the boards you know exactly what to expect. A tough, hard to play against guy, who is starting to show that he has better hands then most expected. Ewanyk will someday wear the C for the Oil Kings.

However if St. Croix even does half of what he's done lately his offensive game might be to much to ignore for some teams. However in order for him to succeed at the next level, the 17 year old has to improve his skating, especially his first couple of strides.

If you've seen both guys play, then chime in on who you would take, and whether or not either are first round picks?

I dont know how it is even a competition between St. Croix and Ewanyk. Coaches dream or not, there isnt enough offense in his game to be a top 90 selection. His size is average at best.
Even with a ppg production, St. Croix was a potential 25-45 range player. Now he has 38 points in 29 games. Even if he goes back to a ppg pace, that would give him about 75-80 points in 70 games. That kind of offense is hard to neglect esp for a guy who is 17 for most of the season.

It's not like this is a guy who's guaranteed to even go in the 2nd round. I mean, I like him, and if he scores like he has been for the rest of the way, he'll go in the later half of the first round, but a mere PPG player with his size could fall out of the top-60. And then maybe Travis Ewanyk could go ahead of him.

Basically, keep it up Michael. Or else.

I don't think a 5'11 draft eligible player who only hits a PPG, without hitting 40 goals or having clear pro-level skills reasonably projects to an NHL career. I think a 40 point Ewanyk could be a good third liner given time.

What we're seeing out of St Croix is what I think he needs to continue to remain in the first round. What we saw out of him in the first few weeks of the season might not even land him in the second round. That was Vincour level disappointing after that nice stretch he put together to end last season.

I'm pulling for him, but we'll see.

the difference between the two is just 1 inch. If Evanyk hits 40 points and he was 6'2- 6'3 then understandable.
Furthermore you dont need 40 goals to get into the 1st round. See Joey Hishon. All you need is a scout that believes in you.

Great debate guys and valid points all around. I'll be quite honest, Ewanyk is the guy that I've liked all year but there's no denying what St. Croix has been doing for the last month and a half.

Right now, in early December, I don't believe Ewanyk will go in the first round but I think there is a possibility that St. Croix might and citing Joey Hishon is a good example of how that is reasonable.

When I was younger I played with St. Croix in Winnipeg (his girlfriend is a bestfriend of mine from childhood), and then when I moved to St. Albert I played with Ewanyk. They are both good kids with a lot of drive and I continue to follow their hockey careers. But St. Croix is not just hot right now, he is a damn good player. He has been a chosen one since he was 8 years old and has been talked about on boards since his bantam triple days. Ewanyk was all but out of a hockey dream since a 2 years ago. St. Croix is much more talented and will make a much better pro than Ewanyk despite Ewanky being well rounded. Mike has that ability that great players have to just turn it on when he needs to. He has a great hockey support around him with his father and others. If he slips out of the first round before draft day then I’ll be writing letters to the Oiler brass to pick him up asap.