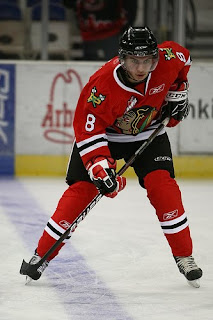 The annual Teddy Bear Toss season is here and several CHL teams (and NCAA too I believe) have already held their version of the charity tradition. Edmonton's Teddy Bruin Toss game is tomorrow when Chilliwack comes to town.

The Portland Winterhawks hosted Prince George on December 11th and the goal that got the ice littered with stuffed toys was an absolute beauty. It was scored by 2011 eligible forward Ty Rattie and was even more impressive considering the player he embarrassed in the process.

The Edmonton Oilers prospect left looking like a soccer-playing pylon is non other than 2nd round pick Martin Marincin. The Slovakian blueliner has had a stellar rookie year in the WHL but was made to look silly on this play by the speedy sniper from Airdrie.

Rattie is 5th in league scoring right now with 16 goals and 46 points through 36 games. The 2nd overall pick in the 2008 WHL Bantam Draft, the 6'0 and 170 lb forward was ranked as the 3rd best WHL prospect by Central Scouting for the upcoming NHL Draft.

Marincin currently leads all defencemen in scoring with 35 points in 33 games and boasts a +6 rating. He'll be heading to Buffalo to play for Slovakia at the 2011 WJC.

Thanks to Portland play-by-play voice Andy Kemper for the tip off on the video.
Posted by Guy Flaming @ 4:16 PM

Thanks for the video!
However you should say 3rd best prospect in the Whl or some people might get the wrong idea!

Sounds good, made the change in case someone else was confused.

- YES, Abney is hurt. Has been out of action with a hand injury for several games now.

- Kristians Pelss hasn't played that last few games with the Oil Kings for a very good reason; he's playing for Latvia in the Div I WJC.

- Pierre Mcguire is not the first to be pumping the tires of Jaden Schwartz. I said it on the air 3 weeks ago that he was my pick to fill the "Eberle" role for Canada this year. I wrote the same thing here on our blog on Nov. 30th: http://thepipelineshow.blogspot.com/2010/11/top-5-tuesdays-stories-for-canada-camp.html

2 weeks ago I repeated that prediction to Kevin Prendergast at an Oil Kings game.

Last week everyone at TSN began saying the same thing.

I know you have been talking a lot about Jaden Schwartz on the show. I listen to you guys almost religiously. It is one of my most important sources for knowledge about the prospects.

I respect you and Dean a lot and your extensive work and knowledge about prospects is what inspired me to the Chl update series!